After last Sunday’s election in France, Europe quickly went back to business as usual. After all, it went well once again. Emanuele Macron is likely to be re-elected as president and Europe can rely on the country’s political leadership for another five years. Bravo! That’s how you lie to yourself. But this has become the most normal of all European exercises. The very next day, people forget what really happened and carry on as before.

If someone had predicted ten years ago that a new movement would form to the right of Marine Le Pen that would be even more radically nationalist than the former Front National, they would probably have come to the conclusion that this could only harm the right because it would divide it, and consequently Marine Le Pen’s chances of becoming French president would be drastically reduced.

But things turned out differently. Last Sunday, Eric Zemmour and his far-right movement won a larger share of the vote (7.1 per cent) than the two parties that have dominated France for many decades, the Socialists (1.8) and the conservative Republicans (4.8), combined. Nevertheless, Le Pen is in the run-off with a result (23.1) that is respectable. If we add Nicolas Dupont-Aignan, who got 2.1 per cent with an explicitly anti-European programme, the anti-European right in France has achieved a share of, believe it or not, one third of the electorate.

This is not necessarily decisive for the run-off, but if many of the supporters of Jean-Luc Melanchon, who got a respectable 21.9 percent, draw the conclusion from their radical rejection of Macron’s policies to boycott the run-off instead of voting for the neoliberal incumbent, it could very quickly become close for Macron.

Nobody wants to know the reasons

In a functioning Europe, alarm bells would be ringing by now at the latest. If a third of the French who went to the polls (the turnout was just over 70 per cent) explicitly voted against Europe, there must be solid reasons for this. The EU Commission should immediately commission a scientific study of the question of how it can be that in one of the European heartlands dissatisfaction with Europe is so enormous and, above all, so enormously increasing. But far from it. Everyone suspects what is behind it, but no one really wants to know because the truth is simply too unpleasant.

In the French election campaign, almost everything revolves around the “purchasing power” of private households. The candidates are outdoing each other in proposals to undo exactly what has happened in the past five to ten years. In fact, households in France have seen only very small nominal increases in their incomes, and in real terms they have not lost out only because prices have risen even less. If you want to know why, you only must read what the Commission – in its boundless naivety – writes about France in its last detailed report from 2017:

“Nominal unit labour costs have slowed markedly, rising by only 1.4% in the three years to 2016, reflecting moderate wage dynamics against a background of persistent labour market slack and measures to reduce labour costs. Minimum wages have increased less than the average wage. As a result, cost competitiveness is improving, even if earlier losses have not yet been fully recovered. Cost competitiveness is expected to continue to improve gradually as wage dynamics remain moderate. However, labour productivity growth remains below both long-term trends and the euro area average, which prevents a faster recovery in cost competitiveness.”

So this is the secret of the French malaise. It is the persistent attempt to increase its own competitiveness by putting pressure on wages. If nominal wages are already rising at less than the EMU target rate of inflation, household purchasing power will increase by chance but not systematically. In fact, as the figure shows, real wages in France have hardly risen at all in the last ten years. If real wages do not fall only because the inflation rate remains below the central bank’s target rate, something is terribly rotten in a monetary union. 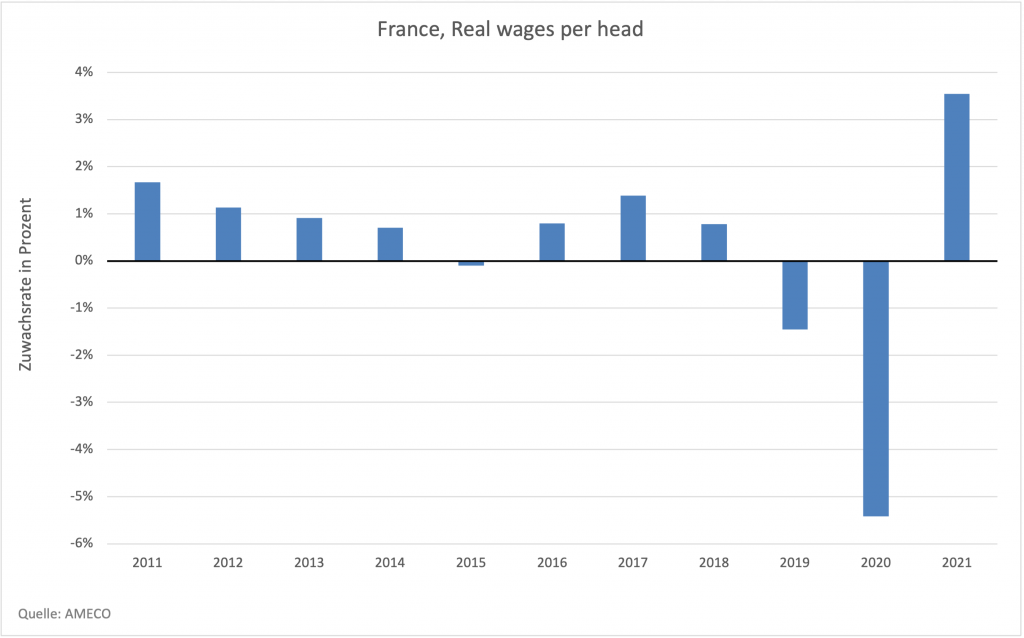 Where does the loss of competitiveness come from?

Under normal circumstances, a country like France does not need to put permanent pressure on its wages at all. It is part of a large internal market for which foreign demand is not very important. Why should a country in a large and largely closed economy like EMU try to overcome the labour market slump by improving its own competitiveness? That would mean weakening the eminently important domestic demand to strengthen the far less important foreign demand. This is obviously absurd.

The Commission itself gives the answer in its analysis above. It says that France has “not yet fully recovered previous losses”. What losses could the Commission mean? According to all we know (cf. the book “Against the Troika“), France was the country in EMU that, from the beginning of monetary union, was by far the best at adjusting its wage development to the inflation rate desired by the ECB, because its unit labour costs always rose fully in line with the two per cent target.

In fact, France has suffered losses in terms of competitiveness, but this was not France’s fault, it was solely the fault of the famous “frugal states” which, like Germany and the Netherlands, took advantage of the start of EMU to pursue a mercantilist policy which led them to use their wage dumping to steal international market share from other countries in EMU and to solve their labour market problems on the backs of the other member states.

The EU Commission is a coward

The EU Commission has never made a serious attempt to hold the “frugal countries” accountable for their blatant violation of the written and unwritten rules of monetary union, or at least to put them in the European pillory. This will be avenged in such election results as we have seen in France and as we would see in Italy if Mario Draghi had not descended from Olympus at the last moment to save the Union a second time.

Because the Commission is cowardly silent and all the other national governments do not have the guts to clearly name the German mistake, there is an ever-increasing subliminal erosion of Europe. Even the big countries like Italy and France are pursuing a policy of catching up with the wrong German policy, because in Germany even the new government insists on the nonsensical position that it has done everything right and is a model for the others. Wage pressure for all, however, means a reduction in purchasing power and demand for the Union as a whole, which does not allow a lasting reduction in unemployment (as shown here).

A new oath in this matter will soon be taken in the matter of national debt. If, against all logic, the countries with high current account surpluses manage to defend the European debt rules, it will be another big step towards the abyss. But the sleepwalkers à la Christian Lindner and Lars Feld are already on their way. They cannot be expected to question their dogmas for even a second and to engage in a serious discussion.

By quickly suppressing the results of the French election in the hope of Macron’s re-election, they are complicit in the creeping decline of Europe. If it is not even possible in the West, in the European heartland, as some pathetically call it, to discuss relentlessly and without political considerations what is going wrong and why, how can it be done in the countries that have to cope with a difficult transformation task and do not understand from the outset how they are being deceived about the true conditions with the image of the golden European single market (see the article on Eastern Europe and the series on the Ukraine conflict).

The French election also shows another thing very clearly: those who want to fight climate change but fail to fight the daily needs of the people, will not be able to pursue an efficient climate policy. A third of the French electorate voted for candidates who not only reject Europe, but also largely ignore climate change as a problem. A policy that protects the planet is only possible in Germany and in Europe if our politicians realise how wrong and outdated most of their economic dogmas are.