Germany’s Federal Statistics Office presented its first results for German gross domestic product (GDP) for 2019 on 15 January. According to these results the German economy grew by 0.6 per cent last year. Last week (14 February) the results of the calculation for the fourth quarter of 2019 were also presented. Here, the Office states that production in the overall economy has stagnated compared to the third quarter of 2019.

These official calculations are regarded by the media in Germany as data of a similarly reliable nature as the statistics on new vehicle registrations. Most journalists and their readers will assume that this is straightforward statistical data, the accuracy of which seems above doubt. That is a mistake. As we explained elsewhere a year ago (in German), the Office’s ‘initial calculations’ for GDP are based on very little primary statistical data, because there are only a few sectors where production results are recorded in real time.

Production results that extend to the end of last year are currently only available for the so-called production sector, which consists of manufacturing (industry), construction and energy supply. At over 20 percent, the manufacturing sector has by far the greatest weight in overall economic production, i.e. in GDP. The construction industry accounts for only about five percent, while energy supply accounts for less than two percent.

The production figures for the manufacturing industry for the fourth quarter of 2019 have been known since February 7th, as the results for December have only been available since that day. Even if one takes into account that the Office is aware of the figures a few days before their publication it must be said that the first calculation of the GDP for the whole of 2019 was made on 15th January without knowing these December figures. In other words, even for the area in which concrete data is available most rapidly, the first GDP calculation also included estimates and not just statistics. For the remaining more than two-thirds of GDP, practically no statistically substantiated results for the end of the year were available at this time. They will therefore have to be estimated by the Office and later, when primary statistical data are available, corrected if necessary.

The discretion of the statisticians

Such a procedure with a large margin of discretion for statisticians is in certain cases appropriate in official statistics, because policymakers are indeed dependent on recognising undesirable developments as early as possible to enable them to take countermeasures swiftly. However, in order to exclude arbitrariness, it must then be ensured that the Statistics Office publishes comprehensible estimates at all times. Presently this is not the case. The way in which the German Statistics Office arrives at its findings remains arcane. For many years, an economic research institute, the DIW in Berlin, had specialized in examining the Office’s figures and publicly criticizing them if they appeared implausible. This independent control no longer exists today.

With its estimate for the fourth quarter of 2019, the Office has moved further away than ever before in the past thirty years from what can be regarded as a reliable calculation of the development of the German economy. Figure 1 shows the development of the production index for manufacturing industry (the black line) over the past decade compared with the quarterly GDP figures. Since the beginning of 2018, the production index of the manufacturing industry has been moving inexorably downwards quarter by quarter. In contrast, GDP is constancy rising, though slightly.

The average quarterly decline in the production index between the fourth quarter of 2017 and the fourth quarter of 2019 is -0.8 per cent. It should be noted that this is the development over two years for the entire manufacturing industry, i.e. including the construction industry, whose relatively good performance has been repeatedly cited as the reason for the good overall economic development as calculated by the Office. The average quarterly growth in GDP over the same period is +0.1 percent.

Production in the manufacturing industry and GDP, Quarterly 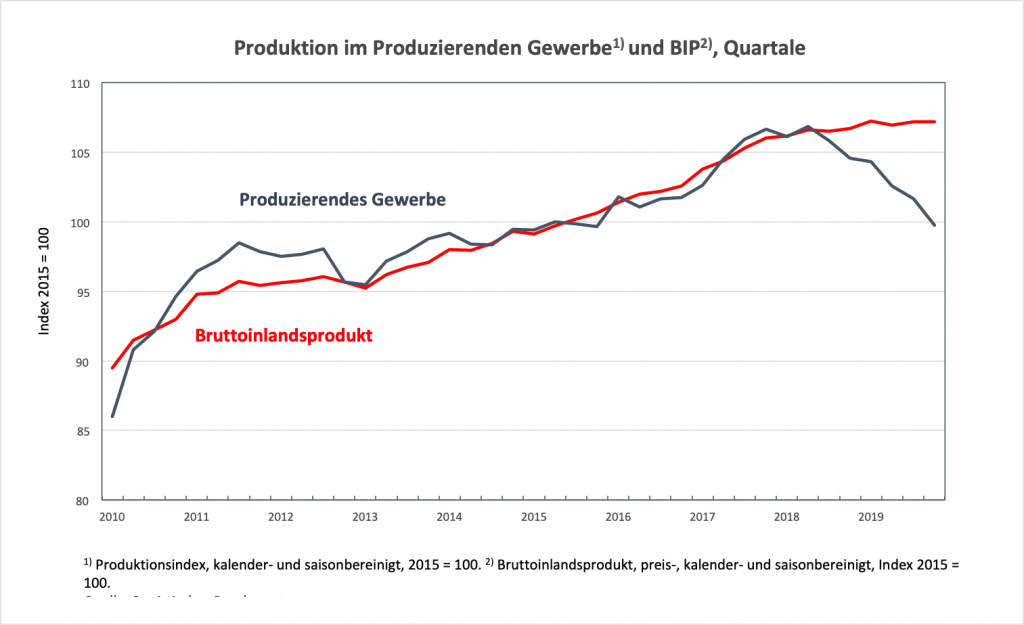 Recording the same curves for the past thirty years (Figure 2) shows that there has never been such a striking deviation during this period. It is true that there have been repeated over- and under-shooting of the production index of the manufacturing industry, i.e. stronger slumps and increases compared to the overall economy, which is normal for this economically more volatile sector. But there has never been a clear change of direction, either downwards or upwards, which would not have been reflected in GDP at least after two quarters, albeit in a weaker form.

Production in the manufacturing industry and GDP, Quarterly 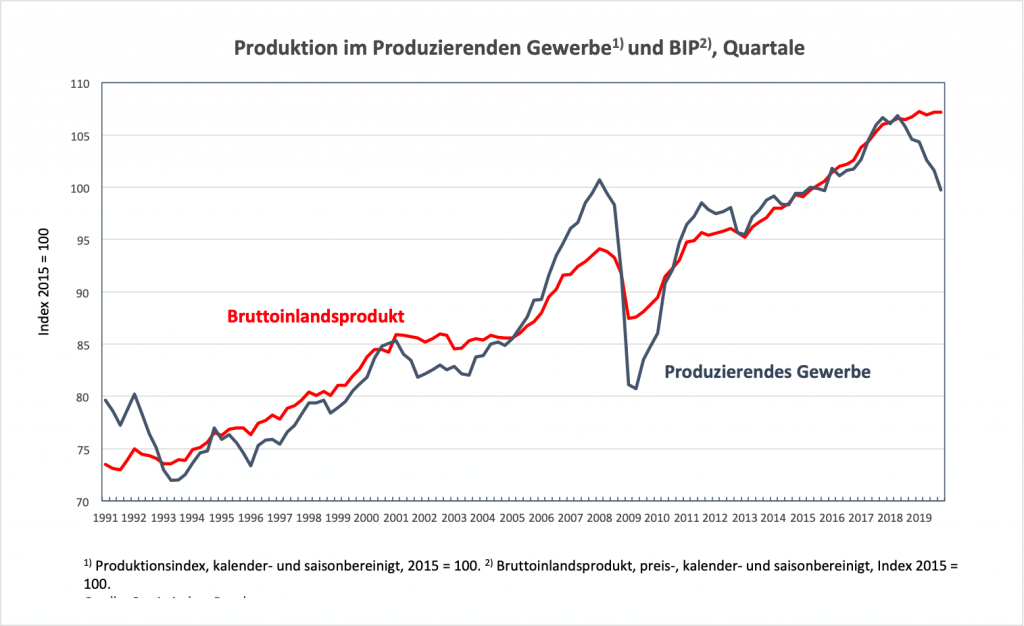 In its press releases following the publication of these dubious figures, the Federal Statistical Office regularly referred to the demand side of the economy, i.e. to changes in consumption, investment, and foreign trade. But very little is known about these variables in the short term. One can orient oneself by indicators such as retail trade or foreign trade, but this does not allow a direct conclusion to be drawn about what has been produced in a month or quarter, because there can be large discrepancies between the production and delivery of goods. There are also no statistical data available for inventories in the short term.

The fact that the Statistic Office’s reasoning is based on shaky ground in its current GDP calculation can be seen in the press release on the 2019 annual results. The office writes on the expenditure component of GDP:

“On the expenditure side of GDP, economic development in 2019 was divided: On the one hand, the services and construction sectors predominantly recorded strong growth. On the other hand, the economic output of manufacturing industry (excluding construction) slumped. Overall, price-adjusted gross value added in 2019 rose by only 0.5 % compared to the previous year.

The strongest growth was recorded in the construction industry with an increase of 4.0 %. The information and communication services, and the financial and insurance service providers also showed above-average growth of +2.9 % each. In contrast, there were strong declines in large sections of industry: Economic output in the manufacturing sector excluding construction, which accounts for a good quarter of the total economy, fell by 3.6 %. Weak production in the automotive industry contributed in particular to this decline.”

For normal readers as well as for journalists who include this report in their articles, but are not familiar with the scale of the economic sectors mentioned, these rates give the impression that the construction sector and the two services sectors mentioned were such a massive counterweight to industry that they could sufficiently justify the overall 0.5% increase in gross value added in 2019 despite the slump in industry. Together, however, the three sectors mentioned only account for 14% of total value added, while manufacturing excluding construction accounts for almost a quarter. Anyone who does not know this can be fobbed off with the information as to which three sectors have grown most strongly and does not question how the growth in the other two sectors, which have a considerable weight in the overall economy, came about: the sector “trade, transport, hotels and restaurants” (16 percent share and 2.4 percent growth) and the sector “public services” (19 percent share and 1.6 percent growth).

It is surprising that the negative industrial development is said not to have had any impact at all in the trade and transport sector. If we disregard the turbulence surrounding the financial crisis of 2008/2009, the current divergence between the development of the manufacturing sector on the one hand and that of trade, transport and the hotel and restaurant industry on the other is the largest since the early 1990s. Addressing, justifying and substantiating this would have considerably increased the comprehensibility of the calculations presented by the Office and thus strengthened the credibility of the GDP estimates.

Overall, the Office bases its estimate on a ‘miracle in the service sector’ for which there is no proof. Many references are made to the continuing positive employment trend. But even that does not take us any further. For if one looks at the employment figures for the service sectors for 2019 (the official data can be read here), one does not find the momentum that would “fit” the development of gross value added there and which would accordingly be suitable to underpin the compensation for the weakness in the manufacturing sector in terms of value added. Indeed, the general assumption is that there are no productivity gains as marked in services as in industry, so that a dynamic development in value added would have to be reflected in a corresponding dynamic movement in employment. With a -0.3 per cent decline of the workforce, the “business services” sector shows a clear reaction to the weak industrial performance.

Although the number of people employed in the “Information and Communication” sector is growing strongly at +3.6 percent – even more than the value added – the number of employees in the “Business Service Providers” sector is increasing at a faster rate. However, the development of employment figures in the “Financial and insurance service providers” sector is going in the opposite direction. Here, productivity must have risen quite considerably, because the 2.9 percent increase in production already quoted above is offset by a 0.8 percent reduction in the number of people employed in this sector. Anyone who finds this implausible will begin to wonder about the strong increase in production in the financial and insurance sector, which is increasingly complaining about zero interest rates and weather-related damage claims.

Finally, what is the situation in “Public services, education, health”, the largest sector in terms of the labour market with 25 percent of the workforce? Here, the increase in the number of employed persons (approx. + 1.9 percent annually) has remained practically unchanged over the past three years.

The unbiased reader of these official figures therefore has ample reason to be surprised at the unusual deviation between the industrial production index and the GDP estimate, as illustrated at the beginning of this article. Therefore, the Federal Statistical Office should disclose in the relevant press releases the estimates not based on primary statistics at the current margin and clearly explain why. Politicians, in turn, should be interested in having information as reliable as possible concerning the current economic situation in order to be able to react appropriately and, even better, to act with foresight.

It is difficult to be the bearer of bad news in authoritarian systems. Democratic systems, on the other hand, draw their strength essentially from the independence and objectivity of their citizens’ sources of information. If reality is alienated by implausible reporting in official statistics and corresponding media coverage, this not only delays appropriate economic policy action but also undermines citizens’ confidence in the state and its institutions.