If one is looking for confirmation of how important and correct our criticism of the Western institutions is, which have been dealing with the economic situation in Eastern Europe and Russia since the fall of the Berlin Wall, one only has to look to Brussels. EU Commission President Ursula von der Leyen told Deutschlandfunk radio on March 7, for example:

“We must not forget, we have already had a very positive development before in a very close cooperation with Ukraine, for example, all the steps to integrate the two markets, the European internal market, but also the Ukrainian economy, more strongly.”

The statement confuses, as so often happens in the West, a development that is beneficial for Western exporters with a positive development of the country receiving the exports. “Integration” in most cases means an economic threat to the countries being integrated, because people in the West are not prepared to do what would really be necessary to enable these countries to develop stably and successfully in their own terms.

The importance of stable external economic relations is underestimated by most economists, including those at the International Monetary Fund and the EU Commission. It is true that it is part of the fixed canon of the prevailing doctrine in economics that the value of money over time should be stable, i.e. that the inflation rate of a country should be constant and relatively low. With regard to the external value of money, i.e., the exchange rate of a currency, which is, after all, very important for small open countries to integrate into the world economy, the mainstream position is less clear. In this area, most firmly believe that there is virtually always a solution in the foreign exchange markets that provides an appropriate balance between strong and weak countries. Free exchange markets and their “flexible” outcomes, however, do not systematically provide this appropriate balance for small and very open countries; at best, they do so only occasionally by chance. Very often, however, they deliver systematically distorted results and thus the opposite of an appropriate balance (keyword carry trade).

For the very large and relatively closed economies of the U.S. and EMU as a whole, however, external relations are relatively stable (figures 1 and 2). While the U.S. has run a current account deficit for many years, movements in both the nominal and real exchange rates (the latter being the key indicator of changes in the competitiveness of an entire economy) are hardly ever jerky in response to external shocks. The range of change over the past two decades has been less than 25 percentage points for the U.S. real exchange rate. 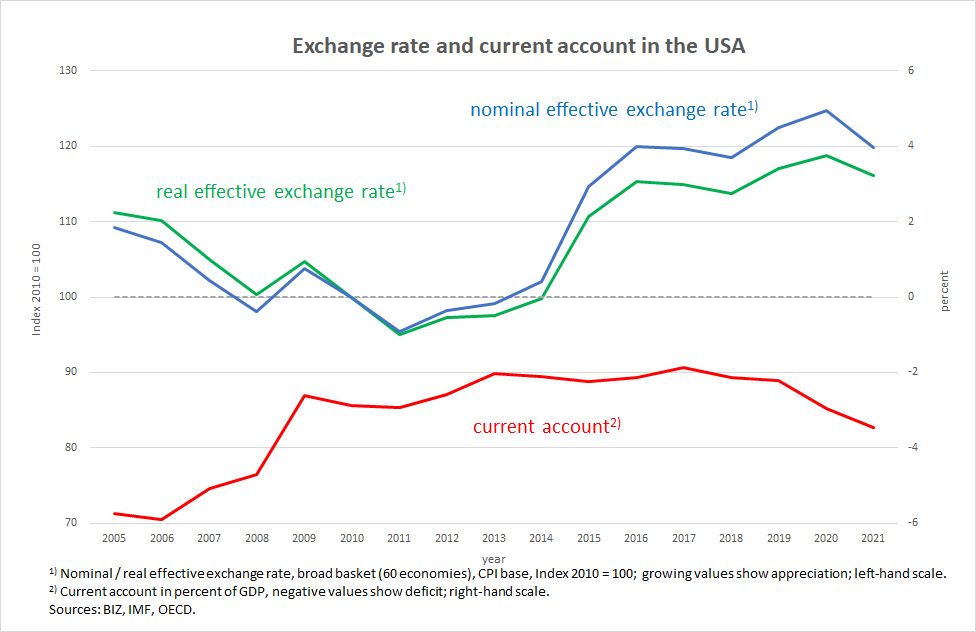 The situation is similar for the EMU. The latter, dominated by the German export surplus, has been running a significant current account surplus for several years. But the nominal and real exchange rates move within a range of twenty percentage points, fluctuating even less than those of the USA. 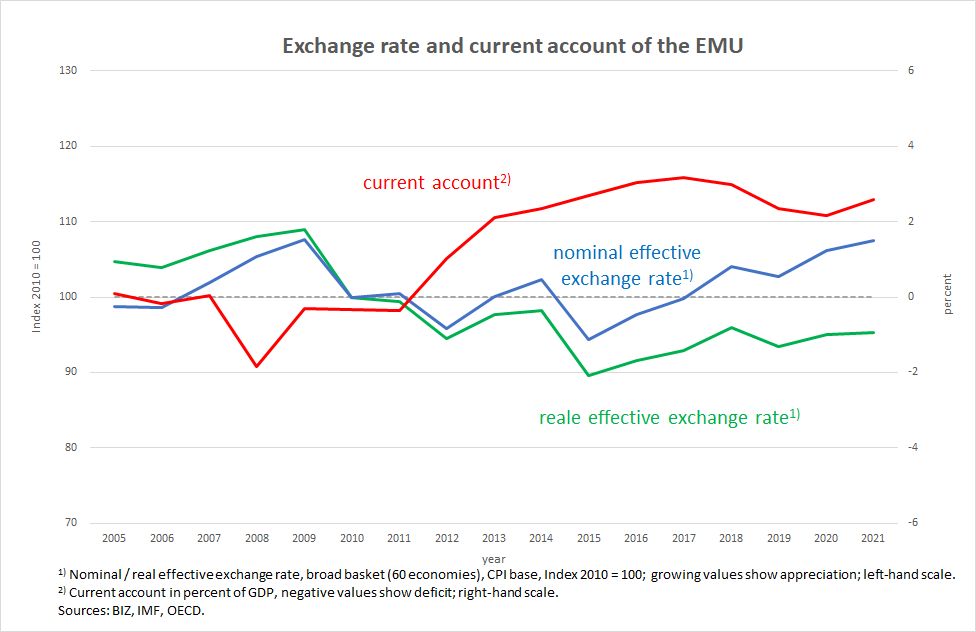 The situation is different in China (Figure 3), where there was still a real appreciation of over forty percentage points against the rest of the world in the decade from the mid-2000s to 2015. But this appreciation occurred in relatively steady steps because the Chinese central bank controlled the nominal appreciation of the national currency at all times. Moreover, it was an appreciation that started from a severely undervalued exchange rate. China had fixed the exchange rate of its currency against the U.S. dollar at a low level in 1993 and only gradually relaxed this fixation at the beginning of the century. As a result, China’s current account surplus fell from a very high level to below two percent of GDP. 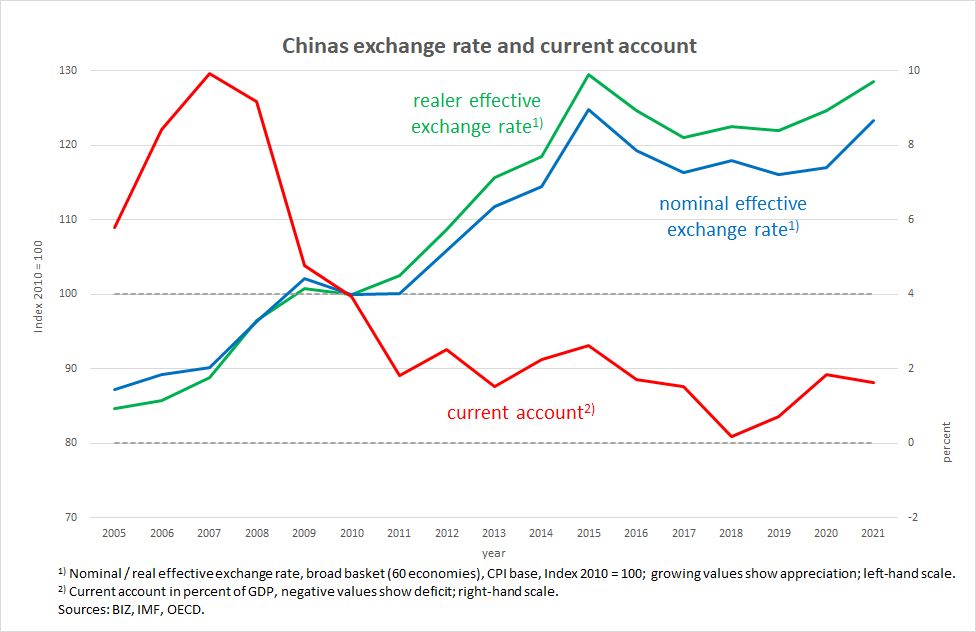 Russia (see figure 4) also still has a current account surplus. However, for a country so heavily focused on commodity exports, the surplus is now rather small, at levels between 2 and 6 percent. By comparison, Saudi Arabia achieved an average annual current account surplus of 12 percent of its GDP between 2000 and 2019. In addition, in the wake of the crisis in Crimea and the Donbass Basin, the Russian ruble depreciated by 40 percent in nominal terms between 2013 and 2015, in just two years, and by more than a quarter in real terms (the left-hand scale for exchange rate indices is larger in Figure 4 than in the previous graphs). If trade had been less commodity-focused, this would probably have caused the country’s current account surplus to rise more sharply again. 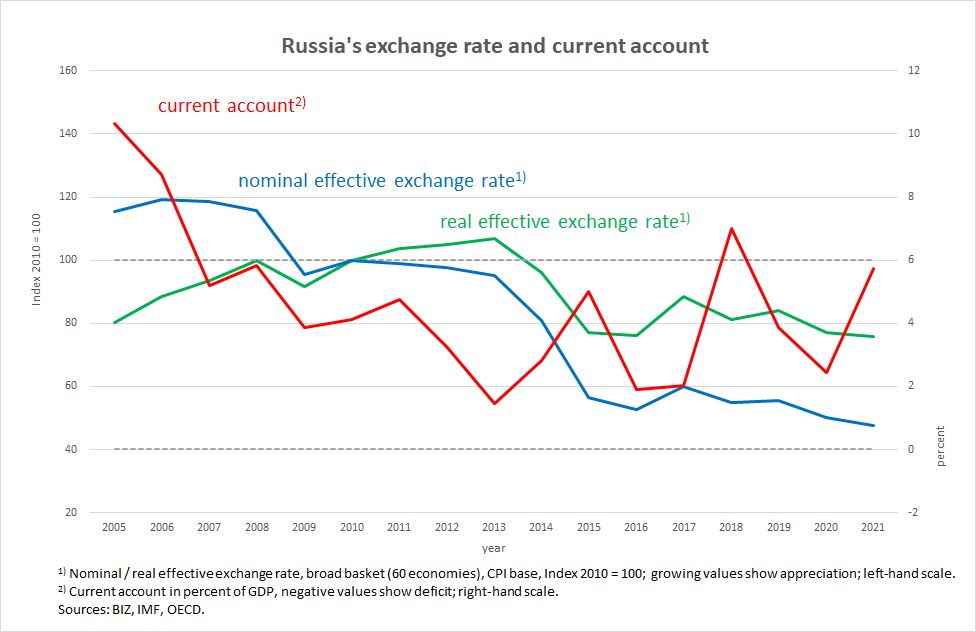 Ukraine’s external situation is catastrophic (figure 5). The country has a massive current account deficit whenever it is not in recession, despite substantial exports of raw materials. The real exchange rate (calculated here only against the euro; the Bank for International Settlements BIS does not report effective exchange rates for Ukraine) fluctuates violently. This means that companies have no planning certainty with regard to their competitive position vis-à-vis foreign competitors.

Moreover, several times during the period under review, the currency appreciated in real terms and the current account balance immediately deteriorated, i.e. it slipped into deficit or the deficit widened. By way of comparison, real appreciation in Russia between 2005 and 2013 was also accompanied by a decline in the current account balance, but it remained in positive territory. Ukraine’s currency development suggests that the country has repeatedly lost competitiveness through currency speculation. As soon as the economy did not perform quite so badly (around 2010 to 2013), this currency constellation immediately led to an increase in imports, which caused difficulties for domestic producers. 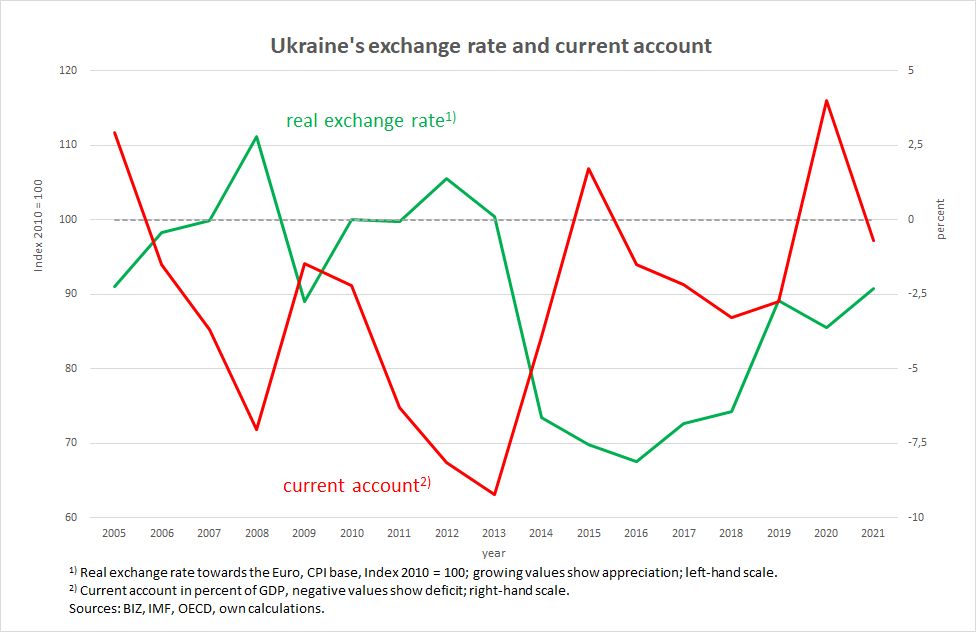 What is particularly tragic in the case of Ukraine is that the attempt to keep its own population from migrating to the West is destroying its own production base. We have already described the same problem for other Eastern European countries some weeks ago that, unlike Ukraine, are members of the EU. Real wages in Ukraine have increased from an index level of 100 to 1400 from 2005 to 2020. This corresponds to an average annual wage increase of almost 20 percent. And this in a country where real GDP has grown by only 2 ½ percent annually on average during this period. This low average growth rate is largely due to the extreme recessions in the wake of the global financial crisis in 2009 (-15 percent) and the Crimea-Donbass conflict in 2014, which set back real GDP by the same order of magnitude again in 2014 and 2015 combined.

Such domestic monetary devaluation necessitates a strong nominal devaluation of the currency if a country’s international competitiveness is not to be rapidly lost. But this devaluation did not occur promptly, continuously or in a way that could be expected to allow Ukrainian companies to plan private-sector investments meaningfully and execute them successfully. The armed conflicts in the east of the country did the rest to worsen the investment climate. As a result, there was no significant expansion of the domestic industrial capital stock; rather, the existing capital stock became further obsolete. As a result, the outlook for the population deteriorated further.

In addition to the exorbitant nominal wage increase, a strongly fluctuating real wage development could be observed in the past 15 years (Fig. 6): In every economic recovery phase, nominal wages shot up steeply, without companies apparently being able to compensate this immediately with corresponding price increases. As a result, real wages also increased very strongly in the meantime. Real wages then fell again just as quickly. Overall, however, this resulted in an unstable development of costs and demand. In addition, as explained above, the currency markets were unable to devalue the currency in time to match domestic inflation. Together, these two factors created enormous problems for Ukrainian companies. In such a mixed situation, monetary policy is also unable to provide positive investment incentives or even stabilize economic development. 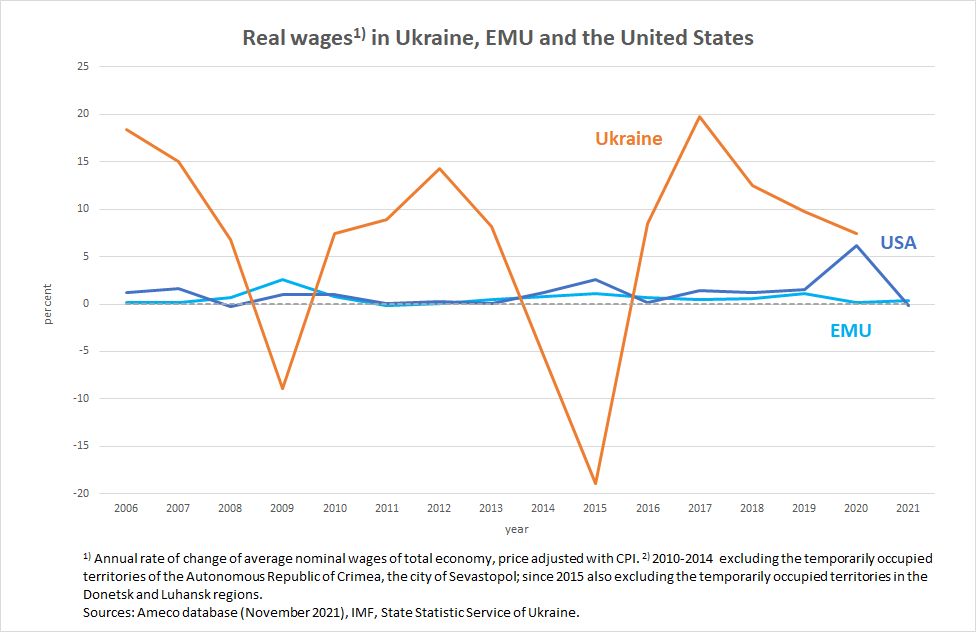 The words of the President of the EU Commission quoted at the beginning, that there have already been very positive developments and that steps have been taken toward greater integration of the Ukrainian markets with the EU markets, lack any basis if one analyzes things from a macroeconomic perspective with a focus on what positive sustainable development prospects have resulted for this country and its people.

Read in the fourth and final part that change through trade is possible and can indeed be fruitful for peaceful coexistence, but only if it is fair for all involved. The West, if it is really serious about integrating the former Eastern bloc countries, must set up a completely new trade and currency model instead of gaining advantages in a colonial manner.