Central banks demonstrate their knowledge and their experience by having a clear judgement about economic developments and the causes of significant price increases, and they should also be able to communicate their judgement and its background effectively. A central bank that decides to raise interest rates and then has revise this decision a short time later because it was completely wrong in its assessment of the economy and/or prices loses credibility for a long time.

In this multiple crisis, the ECB has so far been in no danger of making such a cardinal mistake – albeit with considerable shortcomings in terms of communication. But that time is over. Under media and political pressure from Germany and some other “northern lights”, the ECB has buckled. It will, its chief economist, Philip Lane, has just clearly announced, raise interest rates twice in the next few months. The ECB’s main refinancing rate, which has so far been exactly zero (see Figure 2), will then be 0.5.

The fact that the ECB now intends to raise interest rates in a situation where the economy is extremely fragile and even, as is currently the case in the EMU, threatens to plunge into a new recession (Figure 1) puts it in precisely the most embarrassing of all situations described above. There is then an acute danger that the economy will collapse very quickly and the central bank will have no choice but to cut interest rates again. 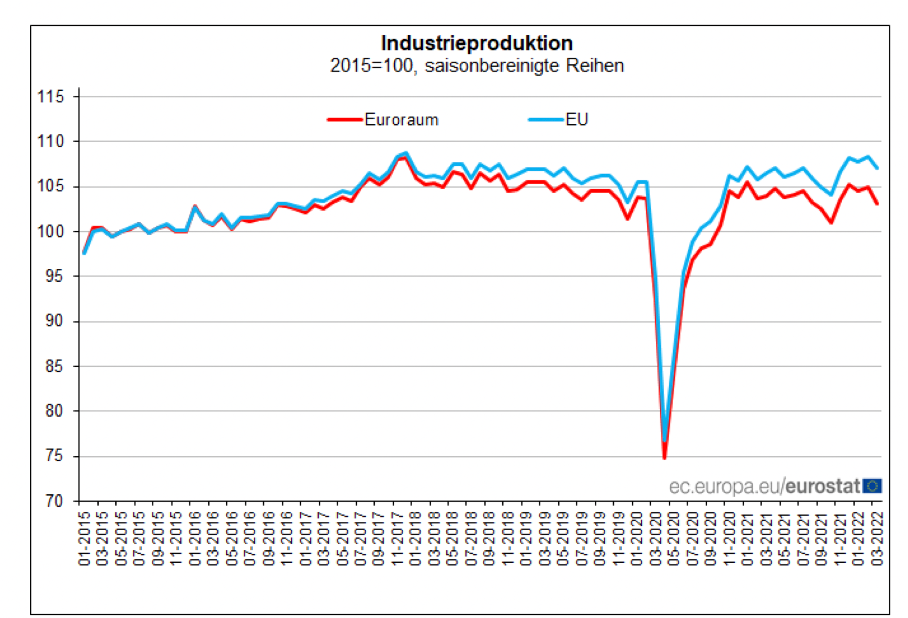 Then the ECB would be exactly where it has been before – under the leadership of a German chief economist named Jürgen Stark. In 2011, the ECB raised interest rates twice by 0.25 per cent each time because of supposed inflationary dangers and then had to cut them drastically again very quickly (see the small hill in 2011 in Figure 2) because its judgement was simply wrong. I’m committing myself: that’s the way it will be again. 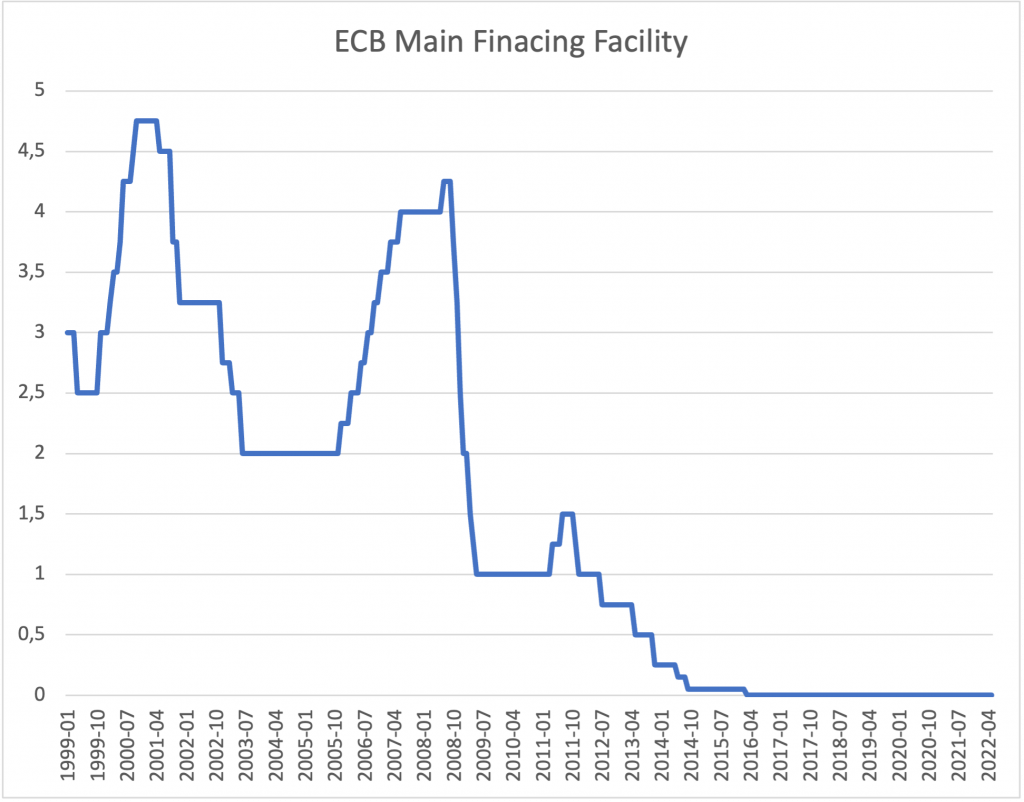 The ECB will also raise interest rates by 0.25 points twice in the second half of 2022, to 0.5 percent. But it will cut the main refinancing rate back to zero in 2023, when price increases normalise rapidly and the economy weakens even more.

The media are going crazy…

The absurd media pressure the ECB is under, especially from Germany, can easily be demonstrated by two assessments from the business press. In the Handelsblatt, a newspaper that prides itself on really knowing something about economics, one can read the following on the opinion page:

“ECB President Christine Lagarde and her team have almost defiantly stuck to their interpretation of the data situation for many months. First it was only “base effects”, later “pandemic-related special effects”. Then “only” the strongly fluctuating energy prices or food prices caused the dynamic price development. But always it was a “temporary phenomenon” – so the ECB’s mantra. …

Here one can, indeed must, accuse the ECB of negligence – base effects notwithstanding, supply chain problems and war-related energy price shocks. If the central bank hesitates for too long and once inflation expectations have become fixed, the fight against price increases can only be waged at the price of a recession. The ECB may already be in this position – so the announced first rate hike for July comes far too late.”

In the Financial Times, on the other hand, Martin Sandbu writes a simple sentence:

“The fact that we have suffered one unforeseen supply shock after another – which no one disputes – is no reason to believe that any of them are not temporary.”

Yes, it is as simple as that. If one thinks calmly, restrains one’s emotions and relies on verifiable facts, then the view that we are dealing with a series of supply shocks worldwide is still correct. After all, that is also the reason why in many countries the measured rates of price increase have gone steeply upwards at the same time. If there were a real danger of inflation everywhere, one would have to observe a process in which rising prices lead to significantly rising wages. This is almost nowhere the case.

Among the industrialised countries only the US economy is currently in a cyclical situation (with a level of unemployment that can be called full employment) where the danger cannot be entirely dismissed that a process will emerge from the wage side in which prices and wages drive each other. This danger is empirically reflected in a core inflation rate (i.e. excluding energy and food) that is significantly higher than in Europe.

The ECB, in order to assess the danger of a price-wage-price spiral, has developed an empirical tool that journalists should look at before blathering on about “inflation expectations”. Philip Lane showed the latest version of the so-called forward looking euro area wage tracker at a lecture at the BIS at the beginning of May (to be found here), which is shown in Figure 3. 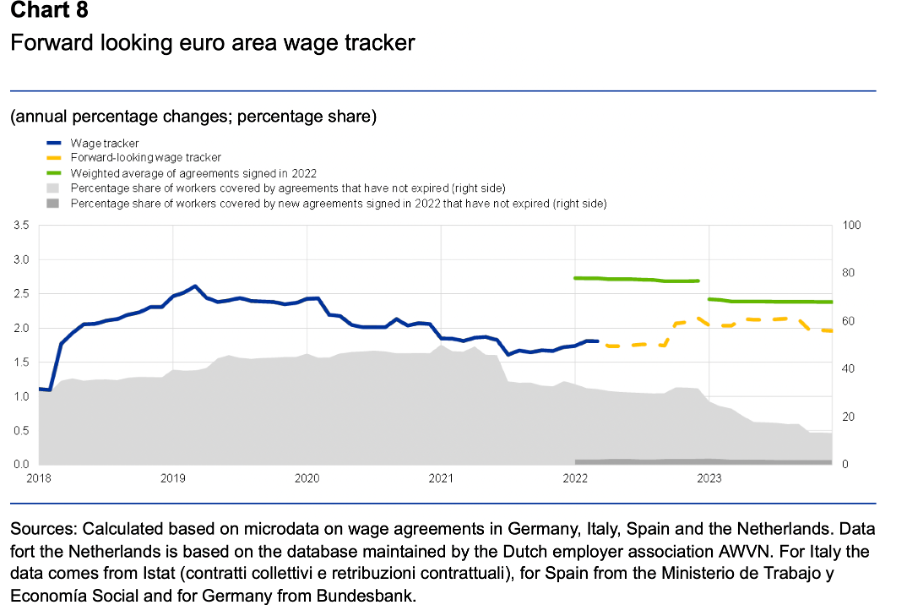 As a result, no significant acceleration in wage growth rates is currently expected for either 2022 or next year. The tracker (the yellow line) is at two per cent for 2023, with wage increases already agreed at around 2.4 per cent. As Lane quite rightly said in his presentation, three per cent is consistent with the two per cent inflation target. To raise interest rates now, when it is clear that the effects are temporary, wage developments are relaxed and the European economy is on the brink of recession, is to commit suicide for fear of death.

…but what is really failing is politics

But no one in the German cheese-belly wants to take any notice of all this. Large parts of German society have settled into a fundamental opposition to the euro under the constant media and academic fire against the ECB. They fundamentally do not trust the ECB because from the beginning there was no sufficient understanding of the interrelationships in the monetary union, not to mention the special conditions in some member countries. Against all evidence, Italy, for example, is still considered to be terminally ill.

For years, German politics has been unable to even begin to explain the relevant relationships. The biggest political blackout was the eloquent silence of the German government on the scandalous ruling of the Federal Constitutional Court in May 2020. In this climate, the impression is growing even among the more insightful among the population that the euro and the ECB are the sacrifice that Germany must make in order not to jeopardise the European unification project.

It was more than problematic that the former president of the German Bundesbank, Jens Weidmann, was virtually seen as the embodiment of the clammy German opposition to “European laxity”. It would be appropriate for the new president, Joachim Nagel, to represent the ECB’s position more offensively. But far from it. He quickly joined the usual German mischief.

In an interview with Der Spiegel (of 28.5.2022), Nagel, who took office at the beginning of this year, said that ultimately it is important to adjust the course of monetary policy quickly if unexpected developments occur. This is firstly wrong in terms of content, but secondly a slap in the face of those who have been responsible for ECB policy up to now. Monetary policy is by no means mandated to adjust its course quickly in the event of “unexpected developments”, but it is mandated to carefully analyse unexpected events and then decide whether an adjustment of its course is appropriate or not. Last year’s decision not to adjust the rate was perfectly appropriate given the fact that the price shocks were temporary (see also this piece).

His statement that central banks have the tools to reduce inflationary pressures and push prices back to our target in the medium term is also more than problematic. It is precisely those tools that the central bank does not have. It is not pushing “prices” back to their target, which is what is at stake, but it is using interest rate policy to crush companies’ investment activity across the board in order to put pressure on wages via rising unemployment as a result, even though wages have not risen excessively at all this time.

Finally, Nagel, who comes from the SPD, not unlike his conservative predecessor, ignores the external imbalance of EMU, for which Germany’s policies from the early 2000s are largely responsible. As Figure 4 shows, the competitiveness gap that Germany (under the Red-Green-coalition) created to its benefit by the wage dumping policies at the beginning of EMU is still there. On the one hand, it brought with it the deflationary effects that the ECB combated with zero interest rate policies. On the other hand, Germany’s surplus position in foreign trade, which clearly violates European agreements, still makes it impossible for other countries to address unemployment via fiscal policy. 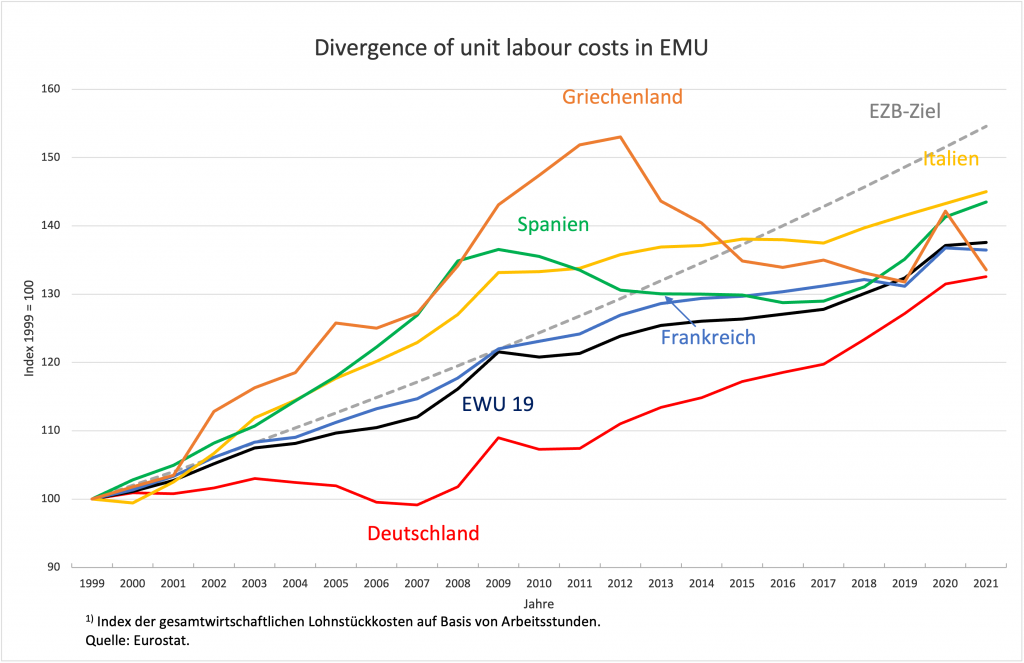 All in all, this will lead to the ECB repeating the big mistake of 2011. It will go down in history as the big central bank that knows the least about its business. This is bad and will be met with astonishment in the rest of the world, as people thought the ECB had emancipated itself from the small-minded (not to say narrow-minded) German view of things.

But the political situation is unfavourable, which puts pressure even on a formally independent institution like the ECB. The French president of the ECB is very weak in terms of content, but she blocks the president and the government of her country from taking a clearer and more critical position. The (sensible) chief economist comes from one of the smallest countries and the other members of the Executive Board – including the German member Isabel Schnabel – have long since bowed to political pressure from Germany and other Nordic countries. Presumably, the ECB had still hoped that the new Bundesbank president, who is automatically a member of the ECB’s Governing Council, would adopt a more rational position. But after this hope was disappointed, the dams have broken. Unreasonableness has triumphed and will cause massive economic and political damage to Europe

P.S.: By the way, there is no need for a “concerted action” at the national level, as the German Chancellor is now proposing. What is needed is a revival of concerted action at European level. This already exists and is called the Macroeconomic Dialogue. Only there can we talk meaningfully about what is in fact absolutely necessary, namely a reasonable understanding of the current price increases and how to respond to them from the different sides. Trade unions must realise that they can only lose in the end by making high demands in response to the current price surges, monetary policy must realise that it is doing damage by acting restrictively now, and governments must realise that they have to support lower incomes in an effective way in order not to further challenge the social consensus.