One would think that “experts” who pretend to understand one thing particularly well and even recommend that thing to economic policymakers would at least be able to comprehend the logical basis of what they are saying. But this has not been the case for decades with the so-called supply theorists. They like to refer to the sentence (attributed to the 19th century Frenchman Jean Baptiste Say) according to which supply creates its demand, but they have not understood the compelling logic behind this sentence until today.

Many years ago, the German Council of Economic Experts (SVR), which has seen itself as the spearhead of supply-side theorists since the 1970s, showed (as demonstrated by me in a (German) paper from 2000) how difficult this seems to be for a neoclassical economist. Say is explicit about demand, which supply theorists would prefer to ignore altogether.

At the time, the Council was looking for a way to balance the overall effect of wage moderation. To do so, it noted that in the adjustment process to an increase in productivity, aggregate demand for goods can be expected to increase even with wage moderation. The Council’s conclusion culminated in a most remarkable sentence:

“It would be strange if, in an economy that records a productivity progress, there were not multiple processes of income growth that then lead to an increase in demand.”

Indeed. That would be odd. Indeed, one can readily establish empirically that there is in fact one process that leads relatively reliably to an increase in demand. This process, however, neoclassically arguing economists like the majority of the Council of Economic Experts cannot find good because its sheer existence is devastating for the position on wage policy and the labour market advocated by the Council in the neoclassical tradition.

These days now, the federal finance minister from the FDP, Christian Lindner, presumably guided by the former chairman of the SVR, Lars Feld, is taking supply-side policy out of the rumpus chamber. And lo and behold, Lindner and Feld are making the same mistake that the Council of Economic Experts made more than 20 years ago.

This shows once again how difficult it apparently is for neoclassical economists to think in macroeconomic context and logically at the same time. In a policy paper on fiscal and economic policy, Lindner and Feld write:

“In particular, measures that raise labor productivity and lower wage and price inflation help reduce the risk of a wage-price spiral and a de-anchoring of inflation expectations.”

This is wrong. Measures that help raise labor productivity do precisely nothing to reduce the risk of a wage-price-wage spiral, let alone “de-anchoring” inflation expectations (whatever that is). In normal times, i.e., times without massive import price increases (see the recent discussion on this blog), such measures contribute to triggering a deflationary tendency. At the same time, they entail the risk of weakening the demand side of the economy and generating unemployment, namely when real wages rise less than productivity, even temporarily.

The European Commission is subject to a similar error in a different context. It writes in a paper on the situation in France (linked in my article about France recently):

“However, labor productivity growth remains below both long-term trends and the euro area average, preventing a faster recovery in cost competitiveness.”

This sentence is also more than problematic. Higher labor productivity should precisely not be used for cost reduction in a monetary union with a clearly specified inflation target. This sentence reveals the EU Commission’s fundamental cluelessness about how a monetary union works and its lack of courage to address and sanction German trade imbalances as such. However, the Commission cannot actually be accused of intellectual failure, because its cluelessness merely reflects the cluelessness of the vast majority of economists.

Let’s start with what is empirically indisputable: in the long run (20 years in each case in the graph), inflation rates behave like unit labor costs, that is, like the ratio of nominal wages to productivity. Mind you, this is the long run. In the short run, as we are currently experiencing, inflation rates can deviate from this if there are large exogenous fluctuations in prices, i.e. price increases triggered by real shocks or by speculation or by both. 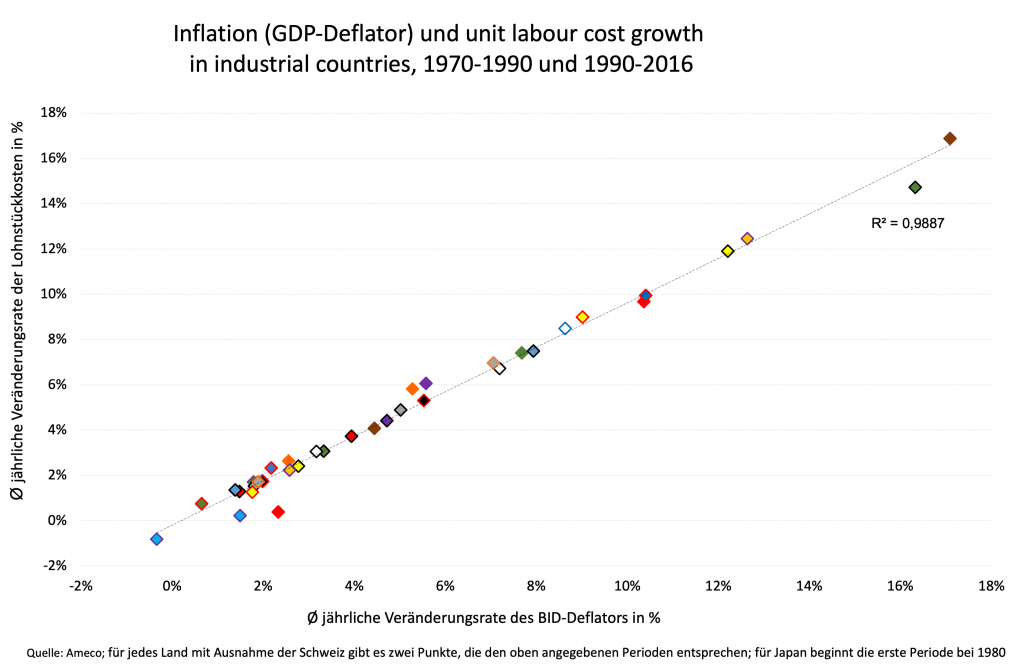 The figure shows very clearly that if productivity rises, over this long run nominal wages normally rise more than national productivity by exactly the percentage that corresponds to the national inflation rate. The first simple conclusion to be drawn from this is that a country with an inflation target must aim for a growth rate of nominal wages that exceeds the growth rate of productivity by exactly that inflation target. This is true in both the short and long run. If exogenous shocks are not taken into account when calculating the inflation rate for wage negotiations, i.e. if the inflation target is consistently adhered to, the country does not have to worry about long-term inflation risks, which then do not exist.

If productivity increases and nominal wages remain unchanged, the inflation rate will settle at zero in the long term, a value that hardly any central bank in this world considers desirable. Those who recommend productivity increases in order to avoid wage-price spirals (Lindner/Feld) or to lower costs compared to foreign countries (EU Commission) must therefore ask themselves how the non-adjustment of wages they assume comes about and what effect this will have on prices and the desired inflation target in the long run.

Anyone who, like the EU Commission, relies in a monetary union on productivity in a country rising more strongly in order to increase that country’s competitiveness is also betting on the wrong horse. If one country leads the way with such a policy and others follow, the Union will no longer be able to achieve its inflation target. Add to that the fact that the Union must expect such a policy to lead to an appreciation of the euro (or to protectionist reactions by other countries), which would wipe out the competitive edge, and it never makes sense to rely on productivity increases as a means of reducing costs.

But higher productivity also means, and this is where Say’s Law comes in, that companies can produce more (a larger supply) and naturally want to sell that in the short run. The question is, in what way does supply create its demand? If nominal wages do not rise, this obviously happens through falling prices. Real wages then rise like productivity, the higher supply can be sold because workers demand more, but a positive inflation target is not achievable. Nevertheless, the higher supply creates its demand.

Now, neoclassical economists would object that falling real wages signal to firms that the production process should be restructured to be more labor-intensive. If firms (in a theoretical second) made production processes more labor-intensive – although they should know from experience that real wage declines do not last! – they would demand more labor, so that the effect of insufficiently rising real wages would be exactly offset by higher employment. But this theoretical second does not exist.

It is the usual trick of neoclassicism to substitute for empirically testable propositions, simply constructs that fit its paradigm, quite irrespective of their empirical validity. If, instead of the theoretical second, companies need even one day to reorganize production and hire new employees, it is already too late. By then, falling demand from workers is already taking effect and all restructuring ideas (even if they ever existed, which is certainly not the case) are obsolete. The case of Greece has shown in all clarity that falling real wages entail falling demand – and rising unemployment was the immediate consequence.

The realistic behavior of companies can also be seen in another case: companies that relocate in order to produce with cheap labor in a low-wage country do not change their production technology at all, but retain it because they can make an enormous extra profit in this way. But exactly this profit must not exist in neoclassical models, because “complete competition” is assumed, which means that there “must” be neither temporary Schumperterian pioneer profits, nor such temporary relocation profits. This simply ignores an absolutely crucial part of reality. All models based on this are worthless from the outset, however complex they may be formulated.

Overall, the validity of Say’s Law combined with the political desire to achieve a specific inflation target demonstrates the paramount importance of wage policy. While it is not appropriate to use wage cuts to balance the “labor market,” it can be used very effectively to achieve an inflation target while guaranteeing demand growth sufficient to fill the production opportunities created by investment activity.

Monetary policy, which for its part has no direct access to price developments, has the task of stimulating investment activity through low interest rates if wage policy is appropriate. Only when wage policy no longer plays its role adequately and looks at current inflation instead of the inflation target (or indexation mechanisms are installed) must monetary policy stand by to counteract the emergence of a price-wage-price spiral with high interest rates.

It is obvious that such aa assignment of economic policies, including wage policy, is most likely to be successful if one agrees from the outset on the position that any increase in productivity should ultimately benefit real wages via rising nominal wages. This avoids frictions in the adjustment of prices with the associated demand and labor market problems, and the inflation target is achieved with certainty in the long run.

A “science” that ignores this fundamental logic and, despite clear empirical evidence, works in its models with the assumption of a substitution of labor and capital cannot expect to be taken seriously. Only those who explicitly abandon the belief in a “labor market” that can be brought into equilibrium by wage adjustment in the sense of a goods market can give meaningful economic policy advice. All neoclassical equilibrium models, however “modern” they may have been designed, are thus invalid.

Those who, like Lindner and Feld, want to make supply-side policies without even considering the demand side are not only at odds with Jean Baptiste Say, but have no theoretical basis at all. But anyone who has no theoretical basis cannot pursue a rational economic and financial policy and will fail in practice.