It comes as it must come: Because the world’s central banks, and the ECB in particular, are unable to resist the pressure exerted by “experts” and the public, they will do exactly the wrong thing. The “inflation preachers” have prevailed over the thoughtful few, over wise analysis. The world economy will blow up in our faces because thousands of academic and private sector economists are intellectually incapable of distinguishing the effect of one or even several temporary effects on the rate of price increase from real inflation. It is that simple and that sad.

Once again, this autistically acting “profession” is ensuring that many millions of people will suffer. Nothing has been learned from the oil crises of the last century and it is making a much worse mistake than it did then. Whereas then it was a boom with clearly rising wages that was brutally stifled by monetary policy, this time it is a recession that is massively intensified by monetary policy. Unemployment will be the result. This, according to monetary policy “logic”, is supposed to discipline wages. But this time, with the exception of a few small Eastern European countries, there is nothing to discipline in Europe because wages are not rising excessively at all. In the first quarter of this year, year-on-year labour cost growth in the EMU was 3.8 per cent, according to Eurostat – and this taking into account that there had been a deep slump in 2021.

In addition, a huge wave of speculation is building up in the European Monetary Union, making Italian government bonds the plaything of the markets. This will bring additional enormous damage if it is not countered vigorously. Again, the ECB is challenged. However, the political leadership of the bank lacks the courage and intellectual competence to avert damage from the affected countries. Christine Lagarde is a complete miscast and many governors of the member banks are trapped in primitive ideological positions or, like the German central bank president, simply serve public prejudices.

ECB between Scylla and Charybdis?

In public, however, the task of the ECB is exaggerated in such a way that one could believe that monetary policy is currently one of the most difficult tasks of all. Between “Scylla and Charybdis” one sees the poor central bank, which is facing a recession and yet has to struggle with high inflation and will finally only get inflation under control at the price of intensifying the recession. Even observers who might be expected to be able to make a balanced judgement are almost obsessed with the “inflation” that seems to have the whole world in its grip.

This, as shown many times in this space, is simply nonsense. There are no real inflationary tendencies in such a weak economic situation as prevails in Europe that need to be fought by the central bank. Europe has not yet recovered from the deep slump triggered by the Corona shock. The recent development in the cyclically crucial sectors, such as industry and construction, is without any momentum. Production in Germany’s manufacturing sector (industry plus construction) is at an index level of just under 98 in the second quarter of 2022, measured by an index whose base value is 2015=100. Immediately before Corona it was 101, meaning that there has been no significant upward movement in these two areas for seven years, but interrupted by the deep Corona slump. In the euro area as a whole the situation is very similar for industrial production, where there is also no cyclical momentum at all.

If there is no cyclical dynamics and unemployment remains high or even rises, there is no dangerous inflation. Price increases, as we can see right now, can still occur for a variety of reasons, but that has nothing to do with inflation, which would have to call the ECB into action. If the ECB, as it grandiloquently calls it, wants to “anchor” inflation expectations, it should have a sensible discussion with the European trade unions to explain that restrictive monetary policy is just as inappropriate in this situation as the trade unions’ attempt to secure real wages. Incidentally, no central bank in the world has the task of achieving or maintaining a certain price level. It merely has to ensure that the price level does not continue to rise above a certain rate.

Will Italy seal the fate of the euro?

Another danger appears on the horizon, one that is suspected to get the ECB into big trouble. A huge bet is building up in the financial markets against Italy. As the Financial Times reports, hedge funds have borrowed more than 39 billion euros worth of Italian bonds from the banks to short them, as it is called in market slang. The bonds borrowed from the banks are immediately sold with the expectation (which in itself depresses the price and raises interest rates) that Italian bond prices will soon fall sharply (consequently Italian interest rates will rise sharply), which would allow the hedge funds to buy the bonds back in the market at a much lower price once they are obliged to return them to the banks. The difference between today’s selling price and the later buying price is their profit.

This is a fairly risk-free business because, with interest rates generally rising and considerable uncertainty about Italy in view of the September elections, it is to be suspected that any increase in interest rates by the ECB will be reflected to a greater extent in a price loss on Italian bonds than on German bonds. Since Italy, less than any other major country in the EMU, “needs” rising interest rates, one expects that Italy’s interest rates will rise far more than Germany’s, i.e. the spread, the gap between the interest rates of the two countries, will increase significantly. In the worst case for the speculators, Italian bonds will not fall any further, which would take away the funds’ profits, but they would not suffer losses yet.

Losses for the speculators would only occur if the Italian bonds rose in price in the meantime. This is rightly considered impossible because, on the one hand, long-term interest rates will generally rise at the ECB’s current policy stance and, on the other, no one expects the ECB to dare narrow the spread or even make it disappear altogether. The FT article quotes a market participant who says “ECB can`t just buy Italy”. Which means nothing other than that the ECB’s announced instrument to reduce spreads, the transmission protection instrument (TPI), is not considered credible. The market is certainly right about that.

In view of the common prejudices about the importance of “market valuations of sovereigns” and German threats to immediately go back to the courts (because of prohibited state financing), the ECB will not dare to really declare war on spreads, but will at most make a half-hearted attempt to correct gross distortions. This is where it is making an even bigger mistake than with the general direction of its policy. In the long run, it is indispensable for a monetary union that interest rates in the member states are the same in the short and long term, and it is always and everywhere the task of the central bank to oppose speculation that distorts important financial prices.

In the first ten years of EMU, as the figure shows, this was indeed the case. After that, the ECB allowed spreads that were absolutely crazy. However, in a monetary union where national currencies no longer exist, the same monetary conditions must prevail in all member states because no country can compensate for the disadvantage of a permanently more restrictive monetary policy through its own measures. Consequently, the discrepancies between the countries become greater and greater – to the point where they can no longer be borne politically in one or other member state. 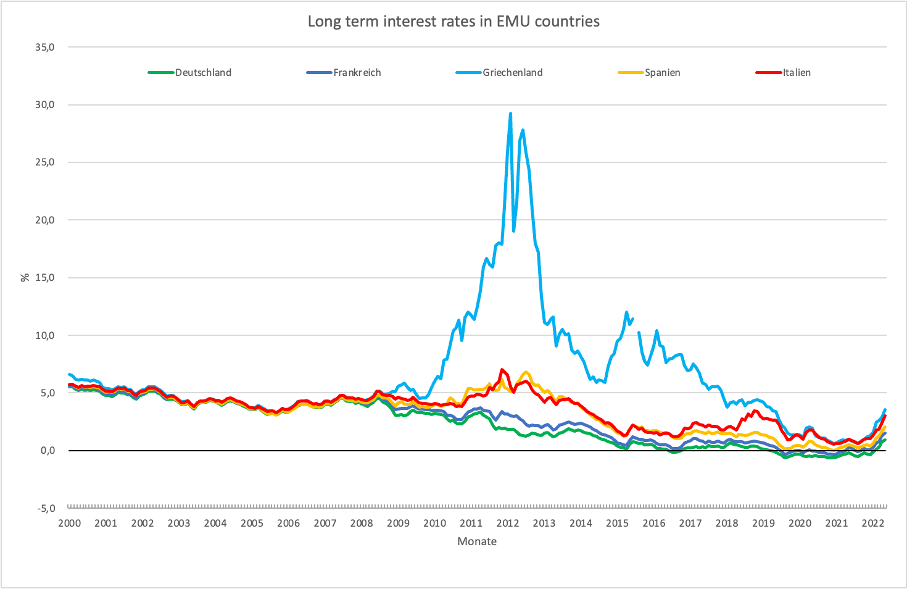 Consequently, now would be exactly the right time to show the hedge funds that their way of dealing with the EMU member countries is completely unacceptable. If the ECB were to announce that from now on it will ensure that long-term interest rates are completely the same as in the first ten years of EMU, the spook would end immediately and the hedge funds would get a black eye from which they would not recover for a long time.

With this simple rule, the ECB does not have to examine in detail and weigh up which members it supports, to what extent, and which it does not consider at all, as is repeatedly claimed. That is not its task. It has to conduct monetary policy, which means ensuring that all member countries have equal monetary conditions and that speculation plays no role. That this is easily possible has been shown for many years by the Bank of Japan, which explicitly controls the short-term and long-term interest rates without being in the least disturbed by the markets.

Everything else must be decided by the governments. Whether a country has too much or too little government debt, for example, is not a question to be judged or even decided by monetary policy. It has a clear mandate and it must uphold this for all countries that have been admitted by the member states or are to be admitted as a new member according to the tests provided for this purpose. Nor do the markets have any right to be heard or taken into account in these matters. Every sensible person knows that the financial markets tend to speculative herding and by no means have the information needed to adequately assess, for example, the Italian budget situation.

All in all, Europe is facing hard times. The German government is completely incapable of setting the decisive course because it is ideologically committed to the logic of the Swabian housewife and subliminally defends German mercantilism, which continues to be Europe’s greatest burden (as shown most recently here). France alone is too weak to challenge Germany. Italy will elect a right-wing conservative government in less than four weeks that has reform of Europe written on its election posters but does not show that it has the guts and the factual competence to actually implement it. This is all happening with an EU Commission that is obviously completely out of its depth. The President is acting – as in all areas – hectically, without any plan and without any competence. The Commissioner responsible for these issues is the proverbial sleepwalker who will wake up one day and no longer recognise his dearly beloved Europe.