Italy voted last Sunday in a way that should deeply frighten all those who still feel a touch of responsibility for Europe in them. But nothing of the sort can be observed in German politics or the public. One merely sees one’s own prejudices confirmed and reflexively admonishes Italian politics to finally turn to the path of virtue that Germany has long been charting. The fact that this election in Italy was preceded by a long process of disappointment and frustration about the behaviour of the most important European neighbours is simply ignored.

Italy, as everyone in Germany who has ever crossed the Alps believes to know, is a beautiful country with rotten institutions, dominated by the mafia, riddled with corruption and equipped with a political system in which the length of time a government stays in power is measured in months, not years. Economically, the story goes, the country has long been on the decline because it saves and invests too little and has therefore lost competitiveness to the successful northern countries. The euro, as the horror story goes on, is too strong for the Italians and too weak for the Germans, but Italy loves the European Union because it keeps helping the country – especially after Corona – out of its self-inflicted jam.

The beauty of such stories is that they not only satisfy one’s own ego, but also show one’s own role in only the best light. The possibility of negative repercussions of one’s own actions on one’s neighbours can be safely ruled out if it is clear from the outset that the neighbour is simply incapable of putting his own circumstances in order in an appropriate manner.

Poor Investment Conditions in Italy: Not a Product of Italy

Friederike Spiecker and I (together with Constantin Heidegger) have shown in the new Atlas of the World Economy, which will be published by Westend-Verlag in early November (in German), that, largely without the intervention of individual small countries and their governments, there has been a fundamental deterioration of investment conditions in the Western world as early as the beginning of the 1980s.

From the 1950s until well into the 1970s, the interest rate set by central banks and long-term interest rates in most industrialised countries were well below the overall economic growth rate (here we are talking about the long-term interest rate, which is depicted in nominal terms like the growth rate). This means nothing other than that the macroeconomic rate of return (which can be approximated by GDP growth) was on average higher than the rate of return on purely financial investments.

Paradoxically, this changed with the neoliberal turn of the times launched by Ronald Reagan, Margaret Thatcher and Helmut Kohl. This turn, which was actually aimed at improving investment conditions through “market reforms”, initiated a sweeping turn for the worse that small countries like Italy could not escape.

For Italy, this turn was particularly drastic, as Figure 1 shows. While at the time of the Bretton Woods regime the country had nominal and real growth rates that eclipsed even those of the economic miracle country Germany, thereafter it went systematically downhill. Never again after the beginning of the 1980s did Italy have investment conditions comparable to those of the Bretton Woods regime. On the contrary: almost without exception, investment conditions were poor.

The only way to overcome such poor investment conditions, as the USA has just shown, is to pursue an expansive fiscal policy or, as Germany is doing, to dig deep into the pockets of its neighbours by obtaining very high current account surpluses in a monetary union. The first path is closed to Italy because of European debt rules, which Germany continues to defend, and the second path has long been blocked by Germany’s own mercantilism. 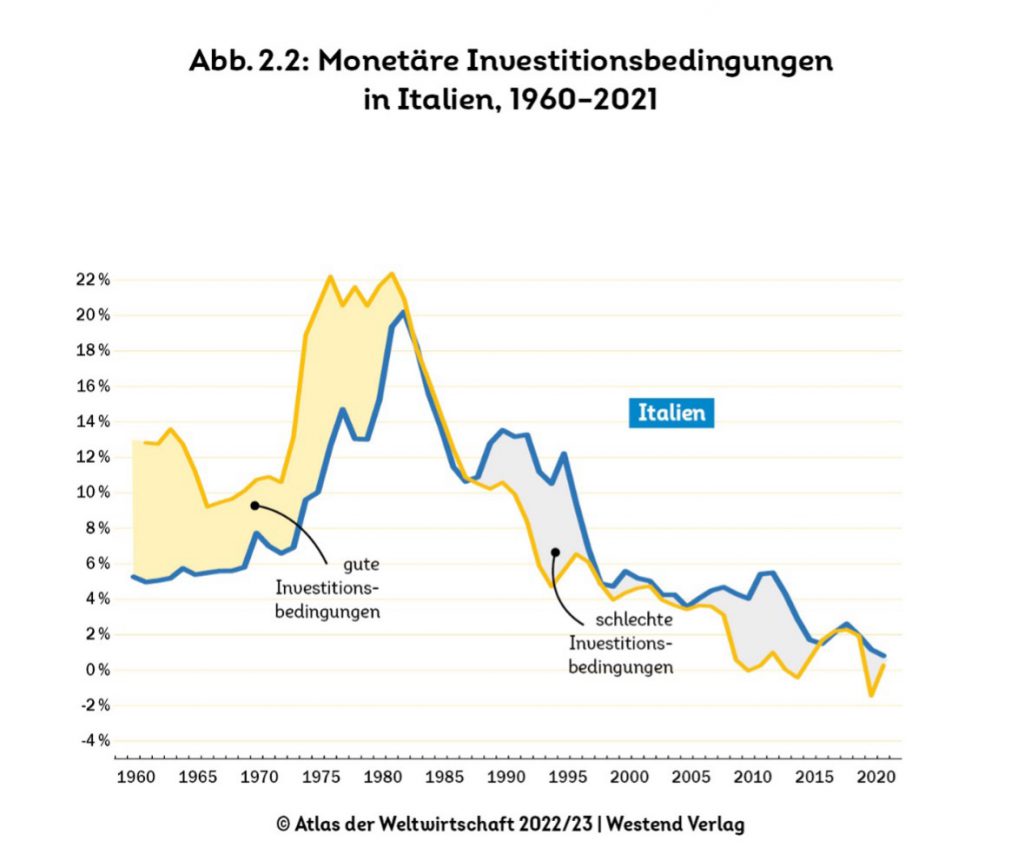 Where does Italy’s high public debt come from?

To really assess Italian government debt, one has to look back quite far in history. For the first thing to take note of is the fact that the high debt of the Italian state is not a result of the last twenty years, but arose long before. The reasons for this are obvious.

Figure 2 shows the course of the government debt ratio (in relation to GDP) from 1980 onwards for Italy, France, Germany and the EMU as a whole. 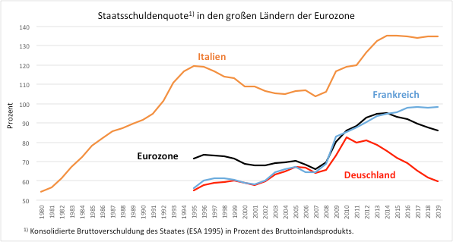 Surprisingly, almost everything that is declared to be the Italian problem par excellence today arose in the 1980s. The public debt ratio rose from a level in 1980 of about 55 per cent to 120 per cent by 1995. After that, Italy was able to reduce the debt ratio significantly until, not unlike most other European countries, it had to stabilise the economy again through government spending policies after the global financial crisis. Only Germany, which shifted the debt necessary for its growth abroad via current account surpluses, was able to reduce its national government debt.

Consequently, to fathom the Italian debt, one has to go back to the 1980s. And lo and behold, the dramatic increase in government debt is the direct result of what – especially in German eyes – is extremely virtuous behaviour on the part of the mass of Italians, namely their propensity to save.

Figure 3 shows the fiscal balances of the individual sectors of the Italian economy from 1980 to the year 2000. The result is astonishing. In the 1980s, private households in Italy saved in the order of up to more than 15 per cent of gross domestic product (the blue line). This means a savings rate of in some cases more than 30 per cent of the disposable income of these households (which is naturally a little more than half the size of GDP because corporate profits are added to it). 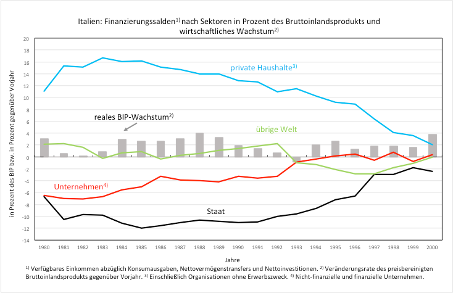 It was this “savings mania” of Italian private households that created the “debt mania” of the state. After the recession of the early 1980s, the state had no choice but to keep the economy going with its own debt. And this is true even though in the 1980s Italian companies still played a constructive role because they consistently supported the state in the debtor role. In this way, despite enormous household austerity, it was possible to achieve somewhat reasonable growth rates. It was not until the end of the decade, when Italy fell into a current account deficit (green curve above zero), that another recession occurred.

After that, everything changed fundamentally in Italy. Italy became a normal country with a normal household savings rate (Figure 4, again from the new Atlas). However, partly triggered by Germany’s wage dumping policy, the current account deficit rose continuously in the first ten years of the century, which, together with increasingly saving companies, made it impossible for the state – despite a low household savings rate – to reduce its deficits significantly. Nevertheless, Italy achieved a primary surplus in all years since the beginning of monetary union, i.e. a surplus of government revenues over expenditures if interest payments are excluded. 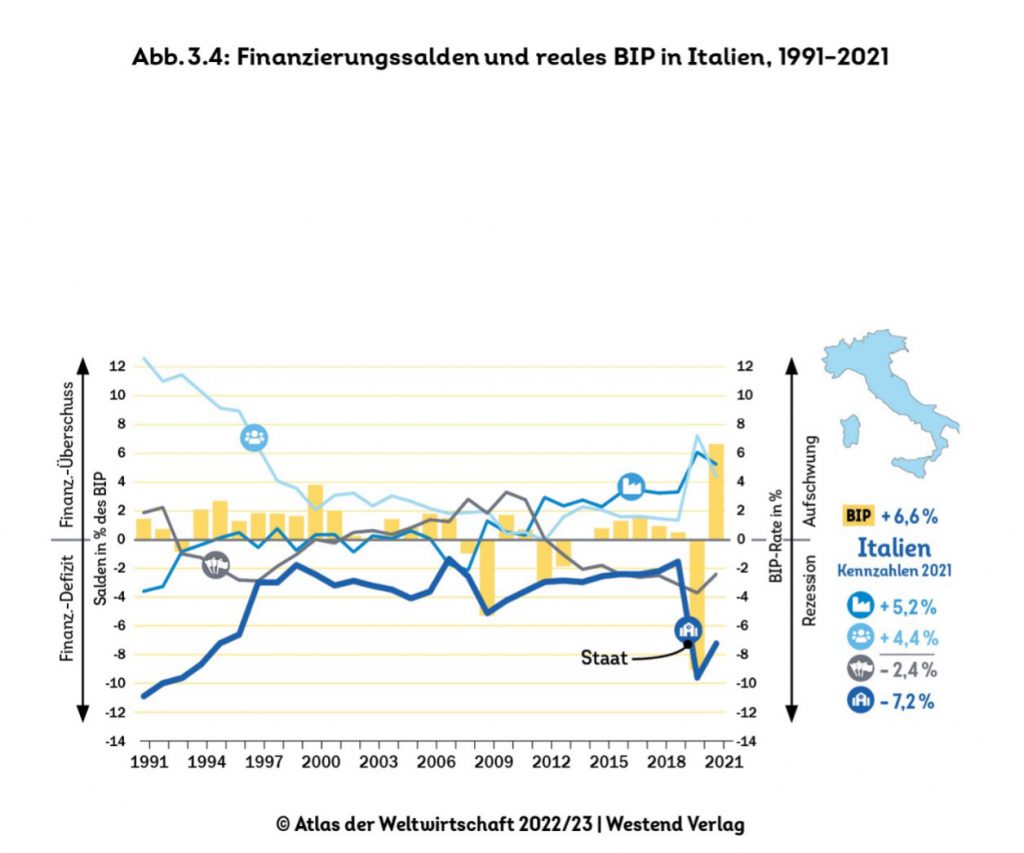 After the global financial crisis, Italy does have a current account surplus, but this is clearly attributable to macroeconomic weakness and a subsequent weakness in imports, not rising exports as in the case of Germany. It is also worth noting that from 2010 to 2012 private households in Italy built up virtually no savings and yet the government could not reduce its deficit because at that time the current account was deep in deficit and companies were no longer borrowing on a net basis. Most recently, net corporate savings have reached an enormous level of over three per cent of GDP, while private households saved very little before the Corona crisis.

Comparing Italy with France shows how enormous the task of the Italian state was in the 1980s. France had to struggle with running a large current account deficit in the 1980s, but private household savings were very moderate then and in the transition to the 1990s. But here, too, it is only because the state permanently controlled economic development and stepped in with its own demand when the private economy failed that it was possible to achieve a halfway reasonable growth trend. 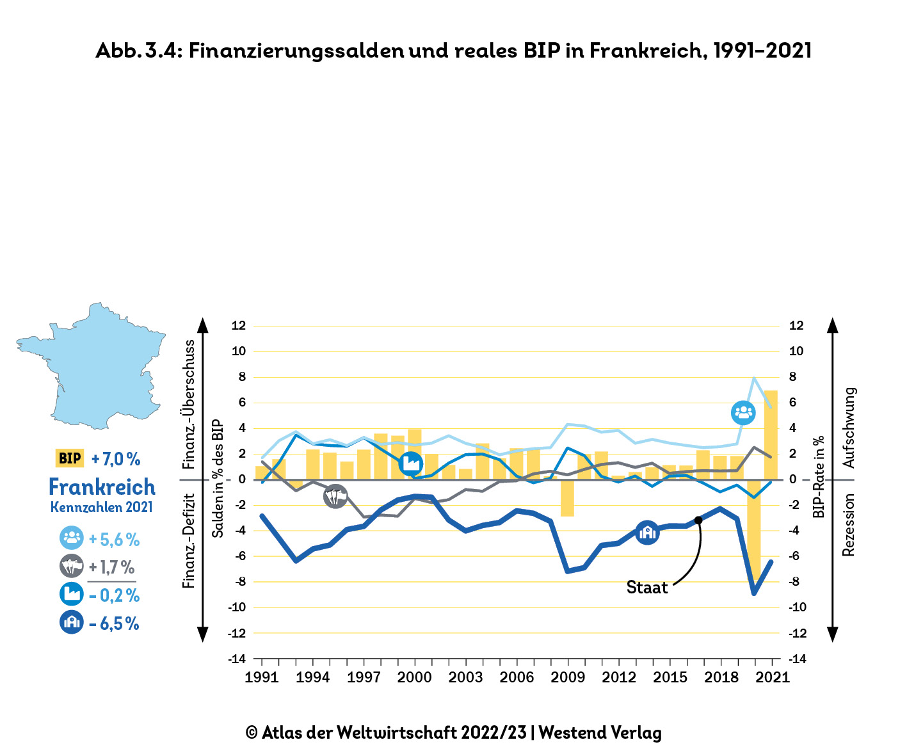 The reasons for the extreme propensity of Italian households to save in the 1980s are certainly manifold. However, there is some evidence that it was related to the very high interest rates that would become common across the world in the early 1980s as the world fought inflation after the second oil price explosion. As Figure 1 has shown, in the early 1980s it was possible to get a yield of 20 per cent on ten-year Italian government bonds.

Since it was not difficult to calculate that the inflation rate would also fall in Italy in the wake of the restrictive monetary policy and the associated high interest rates, a very high real interest rate could also be expected at that time. The consequence was an incredibly high savings formation of private households, which could only be countered with high government debt. With the normalisation of interest rates at the latest since Italy’s entry into the European Monetary Union, the propensity of private households to save has also normalised.

All in all, this means complete exculpation for economic and financial policy in Italy. Nothing but a globally observable fact in the form of high interest rates at the beginning of the 1980s of the last century and a completely rational reaction of Italian private households to this can be blamed for the high Italian national debt. It is high time for the whole of Europe to deal responsibly with our southern neighbour and its economic history instead of insisting on its prejudices.

A German leadership role in Europe?

Europe is tottering and Germany must change. The election in Italy follows the same pattern as the presidential and parliamentary elections in France, which brought enormous successes to nationalist and potentially fascist parties in the spring and summer of this year. This must have consequences. Those in Germany who are still blathering about German leadership while at the same time ripping off the other countries must be put out of business.

Denial, ignoring and denying the European divide has become second nature to almost all German politicians, but what is the point of this tactic today? Obviously, despite Germany’s denial, it has not gone unnoticed by people in neighbouring European countries how shamelessly Germany has cheated its way into a “leadership role” with the help of monetary union.

One only has to look at the statement of the chairman of the Committee on the Affairs of the European Union, Anton Hofreiter, at the FAZ conference just held with the high-sounding title “European Economic Conference”. This is just dripping with talk of Germany’s “readiness” in Europe to finally take on the leadership role that all the European countries Mr. Hofreiter has ever visited have virtually demanded of him.

Not a word from Hofreiter about Germany’s constant violation of the treaties, not a word about Germany’s refusal to adjust the debt ceiling in Europe in such a way that neighbouring countries are not forced to suffer recessions, and not a word about the unspeakable campaigns run by the German press in lockstep with politics every time a politician abroad, such as the future Italian prime minister, dares to criticise Germany. Only “superiority” dripping with ignorance in the “strongest country in Europe”, which itself never makes a mistake, but is in fact far too humble.

That the European Commission is failing, one may already no longer write, because it is simply too obvious and banal. An Italian prime minister who is serious about the renewal of Europe must form alliances in order to stand up to German dominance and step firmly on the toes of the European Commission. The first step in this direction is to come to terms with one’s own history and to represent it proactively in Europe.