The conflict the world is currently facing in Ukraine cannot be understood by ignoring the way in which “the West”, after the fall of the Berlin Wall, conquered Eastern Europe, including Russia, with an economic doctrine that was not only inappropriate but brought massive damage to the countries and a sense of being second-class people.

The result is a large number of states that are not counted as failed states today only because they were able to squander their raw materials in the wake of the opening of all markets. This and absurd privatisation attempts orchestrated by the West paved the way for an oligarchy that was initially hailed by the West as a “private solution” to the structural problem, but which proved fatal for the countries’ development chances.

In addition, it was precisely these oligarchic structures that blocked any path to a functioning democracy from the outset, because only regimes that came to terms with the oligarchs were allowed by them. However, to this day, people in the West do not want to take note of this. Until a few days ago, western firms were happy to trade with the oligarchs’ companies and sell them our luxury goods.

Frustration and disappointed hopes do not only affect the political relations between East and West. Even worse is the fact that the East feels collectively sold out economically. Nevertheless, many smaller countries in particular still believe there is an easy way out of their misery, which is to join the West. Many still cannot believe that the West never had a concept for integration and development and still does not (as shown in my article about Eastern Europe).

The wall in people’s minds

Thirty years ago, when the wall of stone fell in Germany, the walls in the minds of many politicians and economists in the West unfortunately remained. Three decades passed largely unused, if one looks at the economic gap that most European regions lying east of the Elbe have with the “golden” West.

This already begins in East Germany, where despite the immediate complete connection to the economic miracle and tremendous “reconstruction aid”, even today the economy lags far behind and large parts of the population rightly have the impression that they do not really treated equally. The further east you go, the worse it gets.

Ukraine and Russia are classical examples. Russian per capita income has stagnated at a low level compared to the US (Figure 1). Ukraine has even fallen significantly behind Russia on this crucial measure since the financial crisis of 2008/2009, at a much lower level. In contrast, China manages to steadily improve in relation to the US (which has been set at one hundred here). 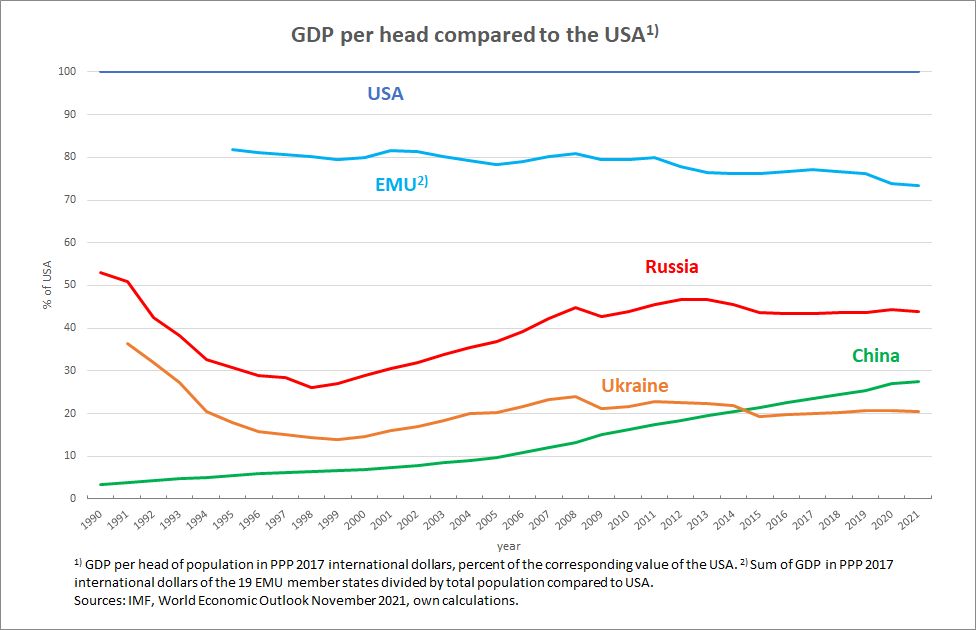 Figure 2 shows that in Ukraine the development of the economy has deteriorated once again since 2015. After a deep recession, the gross domestic product per capita has barely increased to date; the country is no longer making any progress economically from the very moment when it could feel being a part of the West. 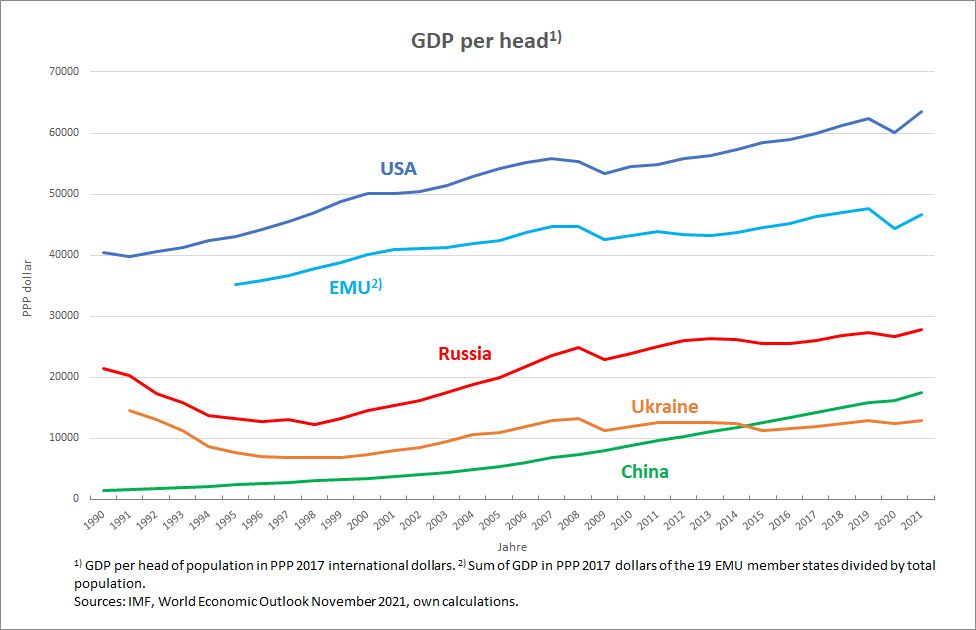 This must be clearly seen: Russia’s neighbour, whose fate we lament today, was brought by Western advisers under the leadership of the International Monetary Fund (IMF) into an economic situation that was and is absolutely fatal for the functioning of a young democracy and for the life prospects of its people.

“Washington Consensus”, the beginning of the end

In the 1990s, I myself and some colleagues tried to contribute to the rebuilding of economic structures and rational economic decision-making in one of the former Soviet republics, Kazakhstan. We visited the country several times a year and had the opportunity to discuss basic economic policy issues with high-ranking politicians and then to present our own recommendations to the government. Colleagues from DIW travelled just as intensively in Russia, Ukraine and other countries.

But wherever one went, others were already there. Because all former Soviet republics were striving for a rapid transformation towards a market economy and thus a connection to the global financial system, practically all governments immediately asked the International Monetary Fund (IMF) and the World Bank for help. Even where the political leadership had the impression that one should not rely unilaterally on the Washington institutions, after a short time there was a need for dollars that only the IMF could cover. Thus, the IMF was everywhere and immediately in a position to establish a monopoly on advising governments. This was true even for Russia in the 1990s.

Of course, the so-called Washington Consensus was preached by the Washington institutions, namely the firm belief in the blessings of the market economy, free trade and free movement of capital. The whole thing was crowned by monetarism, i.e. the conviction, now largely overcome even in the prevailing doctrine, that the flare-up of inflation had to be prevented by a strict limitation of the money supply by an independent central bank. Fiscally, of course, the consensus prescribed frugality, i.e. the attempt of the state to get by with the lowest possible tax rates and without public debt. In terms of the monetary system, i.e. the question of how to fix the exchange rate of national currencies (some of which had just been created), the IMF advocated what it still advocates today, i.e. either absolutely fixed exchange rates or freely floating exchange rates.

One cannot imagine the naivety and brutality with which the IMF and the World Bank simultaneously imposed their “theories” in these countries. I vividly remember a heated argument between our advisory group and the then IMF head of mission in Almaty, who had monetary policy ideas (regarding the famous “rational” expectations in the population) for which he would have been laughed at if he had proposed it for the USA. But he was seriously advocating it for a country that had just introduced a new currency and had just gone through several decades of a planned economy, and where the ordinary person did not even know what role a central bank had to play at all.

The “advice” from the Washington institutions reached a climax with the decision, which came as a complete surprise to the German advisors, to convert pension insurance in Kazakhstan to a funded system. The IMF and the World Bank said there was no alternative and that it was a way to solve the country’s social and financial problems in one full swoop. The government actually implemented it in a short time, against our advice, and the only ones who benefited were the newly created “investment funds” that took citizens’ money and passed it on back to the state. The largest of these funds was run by Deutsche Bank.

However, it was not only Eastern Europe where this mischief was implemented. It was also common practice in the West. The current president of Austria’s central bank, Robert Holzmann, was significantly involved in the attempt to spread this totally nonsensical concept for many years while working for the World Bank, although the World Bank should have known from its experiences in Latin America (Chile was the pioneer of a funded system with the Chicago Boys under the Pinochet dictatorship) what damage this could do. After all, let’s not forget that Germany was also infected by this virus and the Red-Greens introduced the Riester pension in the early 2000s without any serious discussion.

However, the “consultation” of the transformation countries was crowned when it came to the currency issue, which was also completely unresolved in other regions of the world. In the transformation phase from a planned economy to a market economy, the most difficult task for practically all countries was to prevent open and persistent inflation, because the inflation suppressed in the planned economy became obvious and in all countries workers tried to catch up with the West by rapidly raising wages to companies that had no idea at all what they would face on the world market when the borders opened.

Because for the IMF wages as “market prices” were a complete taboo for economic policy and functioning trade unions with some insight into macroeconomic relationships mostly did not exist, there was regularly massive inflation in the years after the fall of the borders – in Ukraine it was particularly pronounced. The only remedy the IMF could think of was, of course, monetary policy restrictions via high interest rates and/or the fixing of a fixed exchange rate against a Western currency (as an anchor), which was supposed to discipline domestic producers via cheap imports.

In Ukraine, the exchange rate to the dollar was fixed after the end of hyperinflation at the beginning of the transformation process and held until 2014. After that, the currency depreciated dramatically, but apparently remained a pawn in Western currency speculation, as indicated by the strong fluctuations in the exchange rate (Figure 3). Russia also went through an absolutely chaotic period of currency adjustments, which ended with the so-called Russian crisis and hurt the country enormously . We will come back to both in the course of this series of articles. 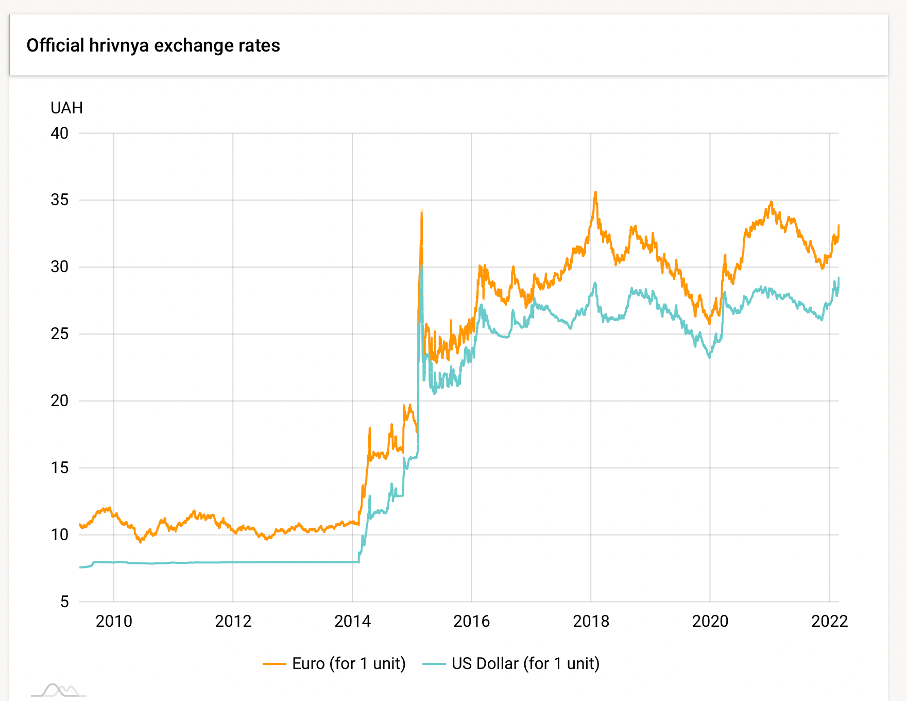 Fixed exchange rates as an anchor were fatal for the real productive capacities in the crucial industries of the transition countries. Almost everything that was domestic disappeared because Western producers prevailed with their completely undervalued currencies. This sealed the fate of the most important enterprises from East Germany to Vladivostok – forever. Once a transformation company has lost its economic basis, it can only be restored with a lot of luck, even under more favourable external conditions. Survival was possible at best as a production location for Western companies, as a supplier of raw materials or as a producer of agricultural products. There was no longer any question of independent industrial development in the countries and the establishment of healthy market-economy structures.

The West had nothing to offer, but claimed the opposite

The countries of Eastern Europe and far beyond became victims of both Western hubris and Western business acumen. It was easily claimed that the opening of all markets would automatically and very quickly create new fields of business for the transition countries, because there was the principle of comparative advantages, which allows even those countries to participate extensively in the international economy that are not immediately able to compete at the absolute level of the West. This is simply wrong (as I have explained many times). The principle of comparative advantage is a chimera, a mirage that is always brought out when there is really nothing substantive to be said.

Much worse is the confusion and callousness on the currency issue. Against all reason, the transition countries were sold the idea that they could liberalise the capital markets without being prepared to offer them a currency system that could have protected them from overvaluation and speculation. And this accusation does not only apply to the USA, which has probably never understood how important a functioning currency system is for small open countries. It applies above all to Europe, where at the very moment in the 1990s when it was recognised that a common currency could be of considerable value, the Eastern Europeans were expected to endure unprecedented monetary chaos.

In Part 2, I will take a closer look at the economic situation in Ukraine with Friederike Spiecker.