Last week marked the twentieth anniversary of Argentina’s currency crisis of 2001, which brought the country to the brink of ungovernability and caused enormous social and political harm. President Fernando de la Rúa finally resigned on December 21, 2001. Just “in time” for this anniversary, the news recently spread that Argentina may not be able to make a USD 2.8 billion repayment to the International Monetary Fund (IMF) in March 2022, which is part of its commitment of the USD 57 billion bailout deal of 2018. Failure to repay the IMF is internationally considered as the greatest of all financial sins and a veritable Armageddon.

The current programme was concluded by the conservative government of Mauricio Macri, who wanted to lead Argentina out of crisis with an economic programme that was completely insane by normal standards, but which was probably also intending to tie the hands of the more progressive successor government. The bailout was preceded by a sell-off of the Argentinian currency and Argentinian bonds, which put enormous pressure on the peso and caused foreign debt burdens to rise sharply. With the crisis coming to a head again towards the end of 2021, the twenty-year cycle has come full circle.

What had happened before 2001?

The reasons of the great crisis of 2001 are still not well-understood by the prevailing doctrine in economics. It has obviously not been acknowledged to this day that the anchor approach that countries such as Argentina and Brazil had chosen in the early 1990s to once and for all defeat inflation was doomed to failure. Nor do people like to remember that, at the time when the currency question was becoming increasingly critical in many emerging economies, most economists and the IMF preferred the so-called “corner solutions” for institutionalising the currency regime: Countries were recommended to keep, under all circumstances, capital markets open and either adopt an anchor approach, i.e., a fixed peg to one of the major currencies, or to let the currency float freely on the market.

However, as shown in here in greater detail, both corner solutions were incompatible with reality, which also means that the official recommendations of the IMF and its major shareholders were directly responsible for the emergence of the crises. The IMF had simply overlooked the fact that any anchor approach, even if successful regarding the stabilisation of inflation, had to lead to an overvaluation of the anchoring country’s currency, which could only be overcome by abandoning the anchor approach. Flexible exchange rates, as any child could have known, are not suitable from the outset for guaranteeing freedom of capital movements and free trade. Ultimately, the West, with its financial institutions and ill-suited economic doctrine, failed in Brazil and Argentina, but of course, any responsibility is pushed aside.

Where corpses lie, vultures are not far away

After its default at the end of 2001 and a huge devaluation of the Argentine peso, Argentina could not (and did not want to) meet its international payment obligations from its bond issues of about USD 80 billion. Two rounds of negotiations in 2005 and 2010 resulted in a debt restructuring, a haircut of almost 70 percent on Argentine bonds and a promise by government to increase repayments once the country recovered. 93 percent of creditors accepted the deal. However, a subsidiary of Elliott Management, NML Capital, and several other so-called vulture funds were unwilling to do so. NML Capital was able to buy Argentine bonds at a bargain price of USD 177 million shortly before Argentina’s default, and later claimed full repayment of the USD 4.65 billion face value.

The Argentine government was sued by the Vulture Funds in New York. In the “Sovereign Debt Trial of the Century,” Judge Thomas Grieser ruled in 2014 that the country could not pay out anything to the other creditors – the 93 percent who had agreed to restructure the debt – until the Vulture Funds were paid in full. Since the Argentinian government under Kirchner did not accept this, Argentina faced a new, albeit dubious, “default” in 2014. It wasn’t until 2016 that Macri’s government made resolving the dispute a key priority of its economic reforms, and Argentina took out a USD 5 billion loan from Wall Street. An agreement was reached with the Vulture Funds in spring 2016 to repay USD 2.28 billion, plus payment of legal costs. For the funds, that meant a return of nearly 1,200 percent.

One might think that the enormous economic damage and social dislocation of this monetary roller coaster and the scandalous returns that currency speculators pocketed in would have led to a rethinking of policy. But recent years show that nothing has changed. Neither have we made progress towards a reform of the monetary system, which would put the international exchange of goods and services on a solid footing, nor has it been understood that without a productivity-oriented wage policy, monetary restriction is extremely expensive.

Inflation rates in Argentina have also been consistently high over the past decade, and the central bank has tried desperately to combat this with high interest rates. In 2019, one received almost 50 percent interest if leaving one’s cash in one’s account. Conversely, one had to expect almost 70 percent interest if wanting to take out a loan as a private investor. Real interest rates (nominal interest rate minus inflation rate) amounted to more than 10 percent. Such high interest rates strangle any economy – and that is exactly what happened in Argentina. In nominal terms, the economy contracted by almost 30 percent between 2017 and 2019, which in turn exacerbated the debt burden denominated in foreign currencies. Looking at the trajectories of the real and nominal exchange rates of the peso (Figure 1) and Argentina’s current account (Figure 2), one can easily see what went wrong in Argentina. 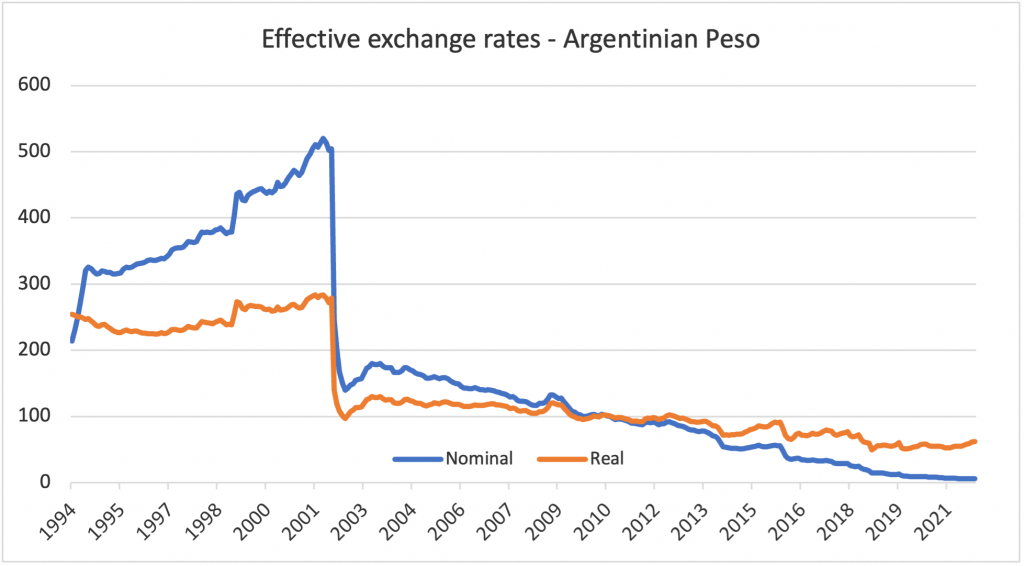 The dramatic real and nominal depreciation of the peso in 2001 initially gave Argentina an incredible boom, driven by enhanced competitiveness. The current account was running a huge surplus and the country’s growth rates impressed the world. But the Argentinian government failed to maintain this enormous absolute advantage in international trade. As early as 2010, the current account slipped back into deficit, and this despite the fact that the real exchange rate after 2003 indicated an almost continuous depreciation, i.e., actually a further improvement in competitiveness. 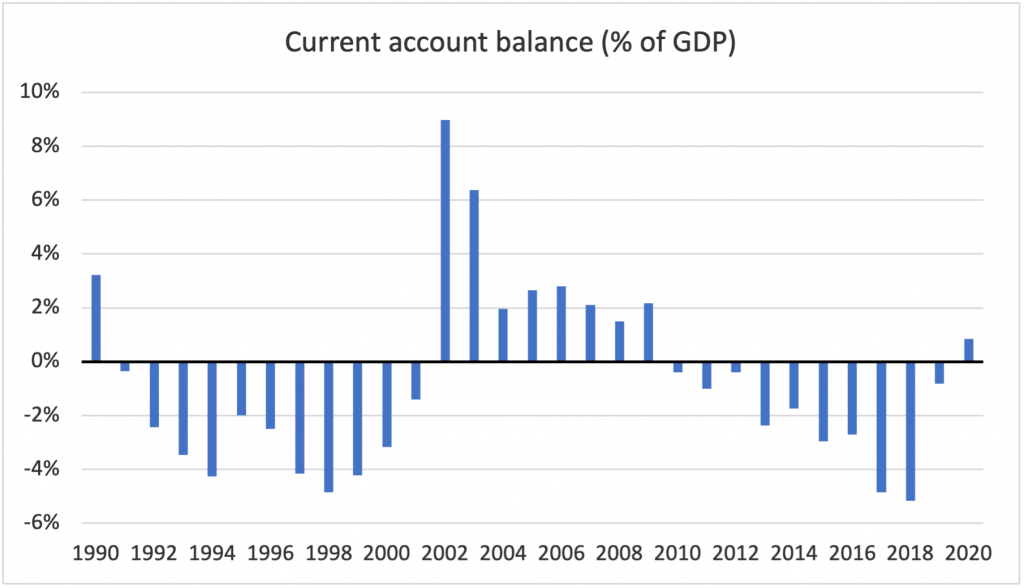 There is much to suggest that Argentine governments allowed the country to again inflate after 2001, but this was not fully reflected or allowed to be visible in official statistics. This way, the peso may have appreciated in real terms, because the depreciation of the nominal exchange rate was not sufficient to compensate for the actual inflation differentials with Western currencies. This version is supported not only by the heated discussion of Argentina’s inflation rates at the time, but also by the development of the current account. Since 2010, Argentina had current account deficits that increased to more than 5 percent by 2018. Only with the deep recession and the collapse of imports in 2019 and 2020 did Argentina return to surplus.

Today, financial markets have largely written off Argentina. Just a couple of years ago, by contrast, in 2017, markets were still optimistic about the outlook for emerging markets in general. Argentina even issued a 100-year bond in the summerwith a yield of 8 percent. Yet, in early 2018, with a booming U.S. economy and strong labour market figures that exceeded expectations, financial markets began betting on tighter Fed monetary policy and an appreciation of the U.S. dollar. For Argentina, this was tantamount to capital flight and a free fall of the currency, which could only be countered with higher interest rates due to low currency reserves and a lack of international support.

Thus, a simple message remains: Even 20 years after the currency drama in Argentina, neither the Western world nor the country itself have understood why they are moving in circles instead of moving forward. What remains misunderstood is the monetary system that makes effective international trade impossible and does not allow developing countries outside Asia to stabilise the external value of the currency in a way that maintains their international competitiveness. The global financial casino still calls the tune, producing false exchange rates that are systematically addressed iwth false economic policies.

At the same time, at the national level, but also at the international financial institutions, it has not been understood that only way to combine price stability and rising living standards is through appropriate wage policy. Ill-suited economic policy, however, which is driven by external constraints, is the main reason as to why development success outside of Asia remains largely absent over the past 50 years. Those who suffer most are the people in developing and emerging countries, who are denied the prospect of a better life and therefore seek their salvation in emigration.

Twenty years after the great crisis, Argentina is once again struggling with its international lenders. The absurdity of setting a dollar exchange rate of 1:1 in the early 1990s is manifested in the fact that today one US dollar costs – believe it or not – 102 pesos. Yet, the fact that the industrialised world has merely stood by watching the South American drama unfold for more than 20 years without even acknowledging its responsibility in the crisis surpasses the absurdity of this exchange rate development.