This is the (updated) translation of an article that was issued January 15, 2015 on flassbeck-economics. We intend to publish one article in English every week to allow more readers to follow closely our analysis of global and European events.

In the recent past, we have repeatedly pointed out that it is essential for governments to intervene in wage setting processes. This is absolutely necessary given the rise in unemployment in the wake of the financial crisis and the skewed relations of power that characterise de-regulated labour markets.

Back in February 2013 we firstly raised the need to drop the simple supply-demand apparatus for labour market analysis in the case of Japan. Meanwhile the Japanese government realized the need to intervene and tried to convince employers that higher wages are of national interest. Now even the US government has spoken out in favour of intervention on the labour market. Last week, the US State Secretary of Labor Thomas E. Perez said that ‘We need to do more to achieve meaningful wage growth, because too many middle-class families are still working harder and falling further behind. We need to do more to ensure that the economy works for everyone, to create broadly-shared prosperity.’

Perez does not mention which specific policy proposals he has in mind, but he is certainly right in putting wages at the centre of his concerns. It suffices to look at the evolution of nominal average hourly earnings of American workers in recent years to realise that the outcome has been catastrophic.

Figure 1: Growth of average hourly earnings of all employees in the private sector against the same month in the previous year. 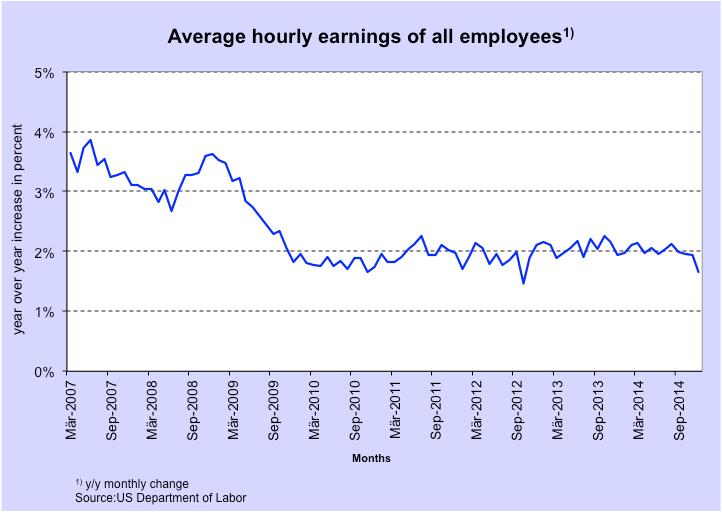 Source: US Department of Labor.

It should be kept in mind that these data refer to the evolution of the average hourly wage of Americans working in the private sector, including banking and finance. Compensation is highest in the private sector and nowhere are they higher than in finance. Needless to say, salaries of executives in banking and finance grew by much more than the average nominal wage growth of two per cent over the last five years. We can only deduce that all other employees, and particularly those in the lowest wage brackets, saw far lower wage increases.

For many workers there have been no real gains, because since the outbreak of the crisis in September 2008, the increase in hourly wages has for the most part been lower than two per cent – the American inflation target. Last December, wage growth was even significantly lower than the target rate of inflation. Many working Americans are losing purchasing power, even though the rate of unemployment (which, according to official figures is constantly dropping) is around six per cent. People fail to make ends meet because their wages are just too low.

The widespread assumption in the United States is that the balance of power in the labour market should gradually change in favour of employees. Now that the unemployment rate has fallen, employees should be in a better position to improve their negotiating position and fight for higher wages. Real wages should start to rise systematically and not just because of accidental developments such as falling inflation due to falling oil prices. Instead, with the help of government, wage negotiations should be set up so that wages rise structurally above the inflation target allowing workers a full participation in the productivity gains.

Last autumn, we pointed out that the current situation is at a real deadlock. At that time, we relied upon a different wage indicator, but the conclusion is the same. An economy simply cannot function like this. When people can no longer purchase the products that they produce because of inadequate real income the productive economy grinds to a halt. The truism applies that ‘cars do not buy cars’. Without higher wages, aggregate demand stagnates and consequently recession endures, seemingly forever. There is no other way to make the economy work again.

Monetary policy, such as Quantitative Easing, which focuses on reducing the savings rate, is as insufficient as is the so-called wealth effect. Central banks purchasing shares and other assets in order to drive up values hope that the increase of wealth of stockholders and shareholders will encourage them to spend more, even with unchanged income. But apart from the pernicious distributional effects of such a policy, it is not possible to lower the savings rate several times in a row. The wealth effect policy tool is not permanently available as an instrument to stimulate economic growth and can therefore not be considered as a part of a toolbox of sensible economic policies. Indeed, it is risky, because successive decreases of the savings rate carry the danger that, in the event of a downturn, private households will increase the rate in panic. This could very quickly lead to an enormous destabilization of the economy.

Were the Obama administration sufficiently courageous to champion robust intervention, it would break the deadlock of the labour markets and address their blatant failures, contradictions and pernicious social and economic effects. Unfortunately, just as in Japan, the Obama administration lacks such resolve. It is all too true that we, in Europe, have little credibility to criticise anyone else on this count. In Japan and in the United States, policy-makers at least understand that something is going terribly wrong. But Europe continues to focus on falling wages in order to improve its ‘competitiveness’. Chancellor Merkel has just repeated that mantra in Davos. It is a fact of life that most of European politicians lack the faintest idea of macroeconomics.

A recovery of the European economy cannot take place without an acknowledgement that robust wage growth is essential. This is especially true for Germany, because it is this country (or, rather, the German export sector) that gained the most from low wages inside the European Monetary Union. Unfortunately, not even the German unions seem to be willing to fight for higher wages. And so the crisis of the euro and the recession drags on.