This is the (updated) translation of an article that was issued February 11, 2015 on flassbeck-economics. We intend to publish one article in English every week to allow more readers to follow closely our analysis of global and European events.

The same game has been played in German politics and in the German media for many years now. It reflects itself in many ways and through many avenues, but the main message always remains the same: any German blame for the euro crisis is denied, all the others are at fault, and only one country did everything right. One of those media preaching German innocence every day, Der Spiegel (and its online branch), recently came up with a new banner: ‘Do not fear the truth.’ Der Spiegel boasts that it has seventy people constantly checking every word of every article that is written including on the euro crisis. Not only is this bizarre in itself, it is also a completely wrong approach to journalism. When, for example, McKinsey published a paper on global debt that was devoid of reason and intelligence (see here for the link (LINK)), Der Spiegel uncritically reproduced it. It conveniently forgot that what we need is not the verification of words but the verification of crucial relationships.

The bias is there for everyone to see. When did Der Spiegel, with the exception of two columnists, Wolfgang Münchau and Jakob Augstein in Spiegel-Online, without ‘fear for the truth’ discuss the causes of the euro crisis and the inglorious role played by German mercantilism, the German strategy of undercutting wages? Last week would surely have been a good opportunity, but all German media, including Spiegel-Online, uncritically reproduced the latest report of the Deutsche Bundesbank showing that German exports once again broke all records and that the German trade surplus is the highest of all time. No serious analysis was provided.

According to an estimate of the Deutsche Bundesbank, in conjunction with the latest data on the nominal gross domestic product (GDP) from the Federal Statistical Office, the German current account surplus broke a new record in 2014: it stands at 7.4 per cent of GDP now. It was already incredibly high in previous years: 5.7 per cent in 2010; 6.1 per cent in 2011; 7.1 per cent in 2012 and 6.7 per cent in 2013. The current account surplus has never been so high, not even in the days preceding the German reunification (see Figure). West Germany’s surplus, which exceeded four per cent in the second half of the 1980s, was considered to be extremely high. However, the resulting pressure from the foreign exchange markets led to an appreciation of the Deutsche Mark against the US dollar and to readjustment within the European Monetary System (EMS). This, in turn, devalued West German foreign assets, which had been accumulated through trade surpluses – a mechanism that no longer exists within the monetary union. 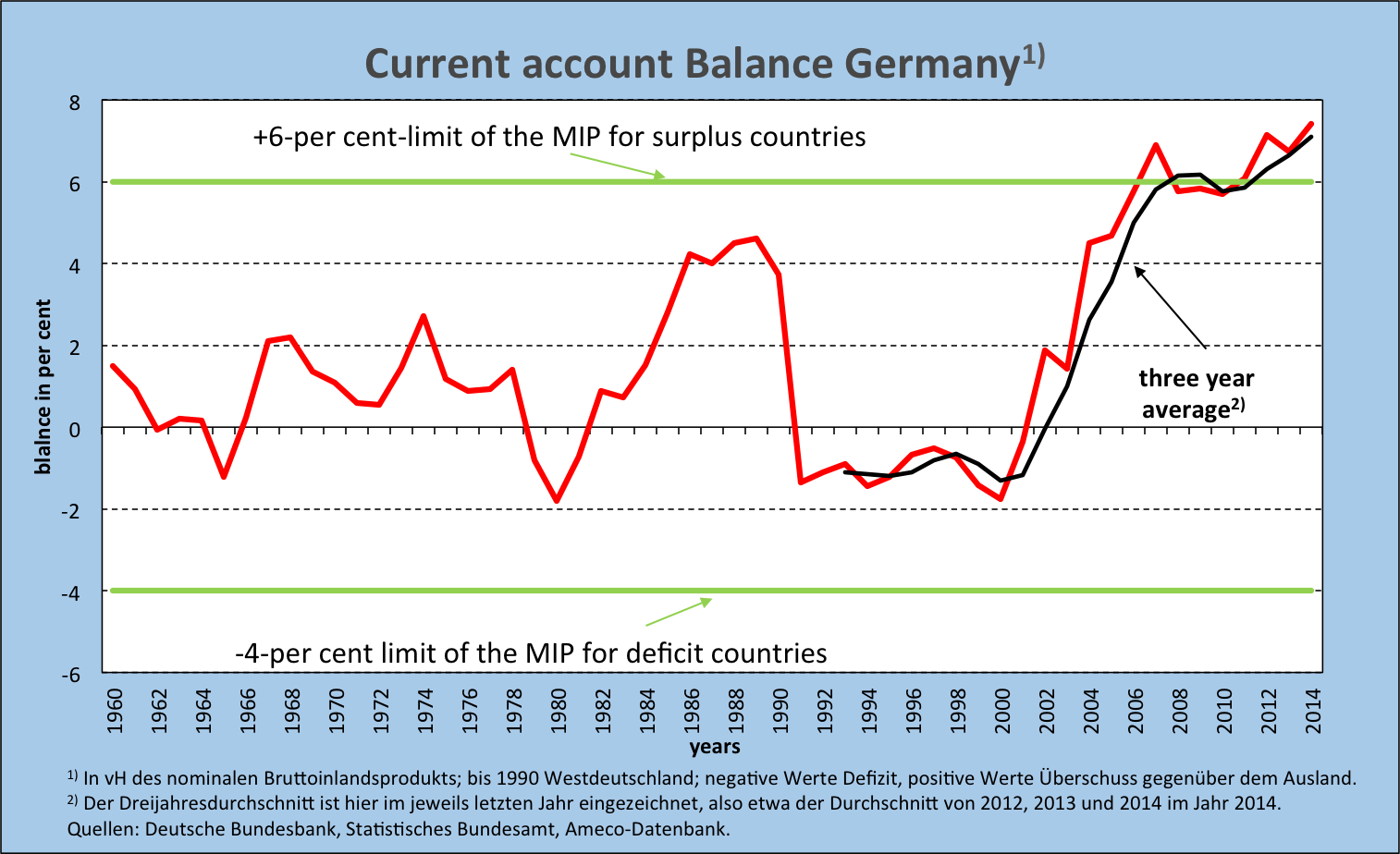 1: in per cent of nominal GDP (West Germany until 1990); negative value deficit; positive value surplus with other countries. 2: the 3 year average has been substituted by the last year of the series. Sources: Deutsche Bundesbank, German Federal Statistical Office and Ameco Databank.

The current German account surplus of 7.4 per cent creates a major macroeconomic imbalance inside and outside EMU. It is higher than the (arbitrarily set) limit of 6 per cent of the Macroeconomic Imbalance Procedure (MIP, which is part of the so-called European Semester), which is, unfortunately, an absurdity in itself. The problem with the limit set by the MIP is that it is asymmetrical: Deficit countries within the European Monetary Union need to adhere to a rule that limits the deficit to 4 per cent of their GDP. If the deficit becomes bigger than 4 per cent, the European Commission will push for a reduction of the deficit. The surplus countries, on the other hand, presumably at the behest of Germany, have to face sanctions only at 6 per cent. On top of that, three-year averages of balances are considered, meaning that for single years the results can exceed or fall below the limit (if compensated for in other years), without the Commission intervening. However, given the fact that the German government expects the surplus to increase again in 2015, a violation of the treaties is undeniable.

This asymmetry should be abolished because the logic of the balance of payments necessarily requires that the sum of all current account deficits equal the sum of all current account surpluses. There is no logical reason why a country with a foreign trade surplus should be given preferable treatment. According to this rule, a surplus country can have a surplus of 6 per cent with countries that a have a deficit of, say, 5 per cent. The surplus would not be a problem for the surplus country, but the deficit would be problematic for the deficit countries. The asymmetry is not only unfair, it is an absurdity.

There is no doubt that long lasting external deficits can be harmful to economies. But the same is true for surpluses. Without surpluses, deficits would not exist. If deficits create problems, surpluses create exactly the same problems. Apart from this, the respective size of economies plays an important role. The current account balance as a percentage of GDP of a relatively big country such as Germany, in absolute terms, is significantly bigger than the same percentage of a small country. A German surplus of more than 7 per cent does not lead to 7 per cent deficits in other countries, but to much bigger ones. If, for example, there would be only two countries, Spain and Germany, a German surplus of more than 7 per cent would cause a Spanish deficit of almost 20 per cent.

It is not altogether clear why the asymmetric MIP rule was agreed upon. There is certainly no logical reason for it. Apparently, it was clear from the moment of its very creation that the German current account balance would move well above four per cent, so that, from a German perspective, a higher percentage was required in order to avoid reckoning by the European Commission. Most probably, the hope had been that the German balance would fluctuate below 6 per cent. But this has proven wrong. By 2011, the three-year average hit the 6 per cent limit only slightly (see the black line in Figure 1), but since 2012 the net balance grew well above it. Probably, at the time, none of the policy-makers could imagine that Germany’s net exports would rise even further.

Twist and turn it however you want, Germany’s blatant violations of EMU regulations can no longer be covered up. Those, such as Der Spiegel, stay far from the truth even if they do not lie outright. When will Der Spiegel inform its readers of the simple truth that the Germany’s mercantilist economic model is based on undercutting its trading partners so that it accumulates surpluses while creating deficits and debt everywhere else? When will the ‘truth commission’ of Der Spiegel – seventy people in total – understand that only a deterioration of German competitiveness (through rising wages) and declining surpluses vis-à-vis its trading partners can help to overcome deflation and stimulate economic growth of all countries inside EMU? It does not seem likely that this will happen in the foreseeable future; the collective fear to face the truth is insurmountable.

Another example: in an interview in past week’s printed edition of Der Spiegel, Wolfgang Kauder, the leader of the CDU/CSU party group in the German Bundestag, said: ‘If Greece wants more money from its European partners, it must pass reforms. Perhaps it helps to realise that it is not the European bailout policy that has driven Greece into misery, but the failure of their own elites.’ If someone makes a statement like this, you would expect that any professional journalist would question why only recently the economic policy of the country has led to such despair among the Greek people and, hence, resulted in the election of the ‘left populists’ (Kauder on SYRIZA) into power. If it is indeed the Greek elites who are responsible for the cataclysm in Greece, why is it that the Troika’s infamous memoranda since 2010 (the memoranda of understanding according to the wording of the IMF) literally spell out the policies that a country has to abide by, including the reduction of wages, pensions and social welfare? Mr. Kauder does not deny the truth, but reality itself. The interviewer, however, remained silent.

Mr. Kauder’s statements also constitute a covert attack upon the European Commission and upon Jean-Claude Juncker (this can also be found in the printed edition of Der Spiegel of last week). If Juncker, as is assumed by Der Spiegel, will question the regulations of the Stability Pact, why will he do so? Is it an attempt, as Der Spiegel suggests, to defy the German Chancellor’s leadership? Is there not a grain of truth in the idea that compliance with the Stability Pact amid a prolonged recession is simply absurd? Does the ‘truth commission’ of Der Spiegel really not understand that it is impossible to push for further ‘structural reforms’ given the extreme damages that these policies have already caused? The policies will lead to other leftist parties winning elections, which is something that Der Spiegel obviously does not favour.

A great example of German denial was provided by the former chief economist of the ECB, Jürgen Stark. In the FT (of February 11) he wrote: „The truth is that, in contrast to many eurozone countries, Germany has reliably pursued a prudent economic policy. While others were living beyond their means, Germany avoided excess. These are deep cultural differences and the currency union brings them to light once again.“ Along the same lines, the Süddeutsche Zeitung wrote a few days before: ‘It is often noted that Greek wages fell sharply because of the crisis. But the truth is that labour costs during the first ten years of the euro rose by nearly 20 per cent in Greece, while they decreased in Germany. Although Tsipras’s populism suggests otherwise, the Greeks brought most of their problems upon themselves.’ Mr. Stark and the Süddeutsche Zeitung do not have the luxury of a ‘truth commission’ as Der Spiegel does, but perhaps someone could raise questions about what is wrong with the 20 per cent labour cost increase and what is right about lowering labour costs? A 20 per cent wage increase in ten years time is not a problem in and of itself. There is nothing excessive or irresponsible about this, given that wages increase in line with productivity plus the inflation target of 2 per cent set by the ECB.

The truth about all of this is that the inflationary use of the word truth in Germany comes on top of the complete denial of Germany’s devastating role in the European Monetary Union. The newly discovered love for what is euphemistically called ‘the truth’ in the German media only serves to distract attention away from the manifest failure of German economic and financial policies and their devastating consequences. However, he media’s new love affair with ‘the truth’ does not fall out of the sky. Now that the left is in power in Greece, the myths about German innocence and Greek irresponsibility need to be intensified.