This article was published October 23 in German

A reader pointed to an article by Professor Thomas Straubhaar, the former head of the Hamburg Institute of International Economics (HWWI) (thanks for that!). Straubhaar complains that central banks are making a mistake by keeping the interest rate at zero. According to him, this makes any reasonable steering of the market economy as good as impossible (see here for his article in German). Professor Straubhaar takes aim at last week’s decision of the ECB to consider (and use) unconventional measures in order to tackle the deflationary trend in Europe. To him, this is unnecessary: deflation is not a condition that entrepreneurs take into consideration when they decide to invest or not. This is so, he says, because:

“The zero interest rate world will therefore continue for the time being. The financial markets will lack any direction for the future. If capital can be borrowed for nothing, capitalism loses its anchor. The policy of cheap money, the purchase of foreign currency and long-term liquidity loans from the central banks cancel credit market and credit supply, i.e. the core and essence of capitalism.”

Under the heading “Central banks without orientation” he further explains:

“Zero-interest loans divorce financial transactions from the real economy. Zero interests loans no longer reflect the relative scarcity of capital, so there is no longer any measure to compare investment projects on their potential for profitability. From this, it follows that the financial sector and the real economy follow completely different directions and laws.”

This is a strange argument indeed, but it is typical of many traditional economists who still refuse to recognise that we live in very peculiar times and, what is even worse, that they are to blame for it.

Why do central banks lower the interest rate? The answer is, in fact, very simple. It is because we live in deflationary times and the central banks are having trouble in trying to achieve their inflation targets. But why do we live in deflationary times? The answer is, once again, simple. It is because wages do not rise. The contrary is happening: wages are under pressure in almost all European countries (including Germany which, according to orthodox economists, is booming, although nominal wages will rise this year with, perhaps, only 2 per cent). The relationship between the evolution of wages and the evolution of inflation (or, more correctly, between unit labour costs and inflation, although currently this distinction does not make a big difference because productivity growth is also lagging) is, in the longer term, absolutely clear and undeniable. But it is also highly relevant in the short term (see figure, with the inflation rate (average annual change rate of GNP deflator) on the x-axis and the average annual change in unit labour costs on the y-axis). 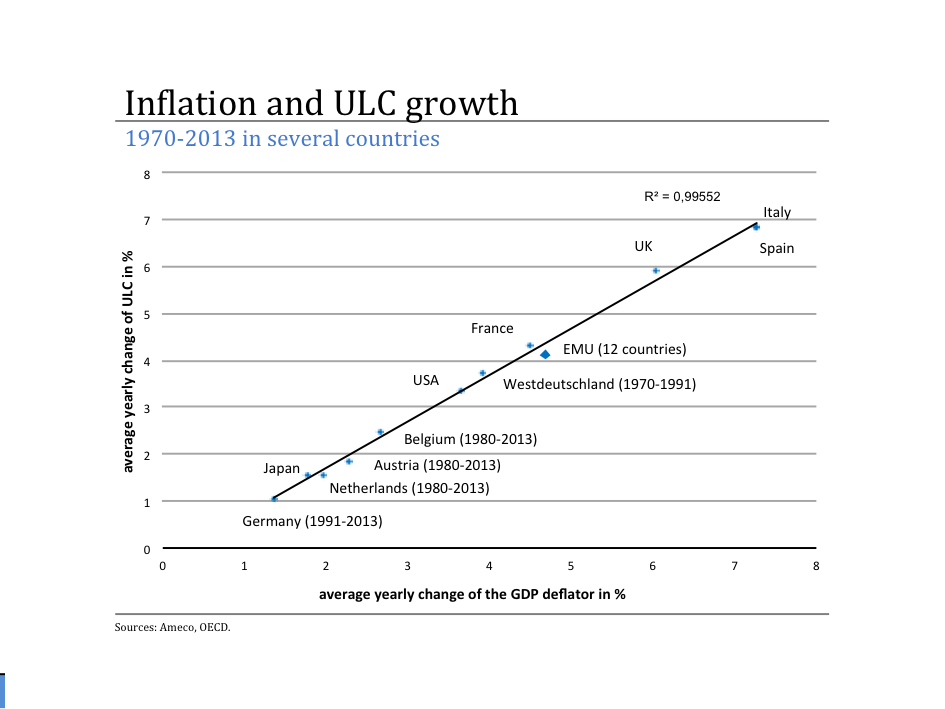 But why are wages under pressure? The answer to this question is trival. It is because unemployment is high worldwide and especially in Europe. And why is unemployment high? Thomas Straubhaar, and with him 95 percent of the economic profession, would argue that the reason for this is clear: wages are too high. According to neoclassical economics it is very simple: unemployment will rise if (and only if) wages are too high. According to them, the labour market is a market like any other. The price of labour is determined by supply and demand. If there is excessive demand, there is full employment. If there is excessive supply, there is unemployment.

So here we have the whole conundrum. Wages are too high (this creates unemployment) and they are too low at the same time (this creates lack of aggregate demand). But this is, of course, a meaningless statement. Now we know the deeper reason why Straubhaar and his colleagues have such great difficulty explaining what is going on. Straubhaar and some of his colleagues would presumably argue that unemployment is primarily caused by high wages, but that this is not always the case. In 2008, as a result of the outbreak of the financial crisis, unemployment rose sharply, although, in this specific case, this had nothing to do with the cost of labour itself.

At first sight, this looks like a reasonable explanation: unemployment is generally caused by the high cost of labour, but sometimes shocks take place that cause unemployment, regardless of the cost of labour. But this explanation does not solve the problem. High unemployment putting pressure on low wages will destabilize the overall economy. The crucial fact is that the balance of power has shifted again in favour of the employers, who will, of course, try to reduce wages even further. But what happens in a market economy, in which there is an inherent and close relationship between unit labour costs and inflation? Even neoclassical economists accept that in such a situation deflation or a deflationary trend occurs because increases in wages (or unit labour costs) are insufficient to achieve the inflation target.

It is actually quite simple for governments to respond appropriately to such undesirable development. Governments need to stimulate the economy aggressively to avoid the new pressure on wages by either directly intervening into the labour market to prevent companies from lowering wages even further or, in tandem with the central bank, the government can stimulate the economy by implementing demand programs, so that wage pressures do not occur because financial market-related unemployment is falling rapidly.

Those who reject these two options – and this the case for the great majority of German economists, including Thomas Straubhaar – have a problem. For what Straubhaar is saying, at least implicitly, is that one cannot apply a therapy that tackles the real cause of deflation, because doing so infringes upon a series of lofty neoclassical principles or dogmas: governments should not intervene in the labour market, governments have no active role to play in economic stimulus.

It is exactly the same economists who, for utterly dogmatic reasons, exclude the appropriate means to combat deflation from policy that put the ECB in a hopeless situation. With declining or insufficiently rising wages, consumer demand will always be weak. When we were confronted with a recession, as happened in 2008 and in 2009, lower wages did not lead to new employment, although this is what neoclassical economists expected. The problem is very simple: as long as consumer confidence is low, demand is low and as long as demand is low, the anticipation of profitability is low and as a consequence the rate of investment does not rise.

It is then that Thomas Straubhaar and his mainstream colleagues appears on the scene, saying that the ECB should stop its low (or zero) interest policy, because it confuses investors (a good example of the same kind of fundamental misunderstanding can be found in an editorial of the Süddeutsche Zeiting (SZ) by Markus Zydra here). In fact, Draghi said everything which has to be said about it more than a year ago. The problem is that no one wanted to hear it (we have noted this here and we commented on it again here). The German economists remained completely silent. They did not support Draghi.

But silence is not good enough. What, then, should Draghi do? Should he raise interest rates, although it will not increase the rate of investment? Should Draghi call the German finance minister, informing him of his decision to raise interest rates, while Wolfgang Schäuble, as by miracle, will agree to implement a huge credit-financed economic stimulus program that will pull the whole of Europe out of the swamp? Or should he call the German trade unions and ask them to act immediately for rising wages because otherwise the ECB will drive the European economy into the abyss by interest rate hikes?

Dear German-speaking economists! It is unintelligent to oppose unorthodox measures just because they are unorthodox. The question to be asked is why an unorthodox constellation of data  exists. If you understood that the orthodox economists themselves contributed quite a bit to bring about a situation that requires unorthodox measures, the best strategy to follow now would be to remain silent. Otherwise those who try to get the coal out of the stove do not appreciate it when those who started the fire give them ‘expert’ advice.

Translation by Will Denayer