If you want to understand why we have such a hard time explaining economic processes adequately, you have to look at the discussion on inflation these days. It seems as if we have to puzzle over and over again what the causes of inflationary processes are and decide again and again under high uncertainty whether we are currently dealing with a dangerous or a relatively harmless change in prices.

Not only the various media, but also economists and politicians give the impression that we are dealing with terra incognita and that only the most courageous and intelligent monetary policymakers are in a position to clarify the situation. Many central bankers themselves also go to great lengths to convey the impression of a great mystery.

However, what causes inflation and how slightly rising prices can turn into an inflationary acceleration that can no longer be easily controlled is fully understood by now. In particular, the processes observed worldwide after the two oil price crises of the 1970s have provided sufficient illustrative material to be fully elucidated. However, these processes have not been adequately reappraised and deeply understood scientifically. There have been various models that have been used to try to explain the overlapping of supply and demand shocks and their effects, but this has all remained rudimentary because what happened has been forced back into theoretical corsets that were not appropriate in the first place.

I will not go into this in detail here, but the gist of the story is very simple. Oil price increases in the early 1970s hit fully employed economies where unions were tremendously strong and anyway just about to translate their power gained from extreme labor shortages into exorbitant wage increases.

In this situation, there was an external shock in the form of rising oil prices, which in itself had initially raised price levels in the industrialized countries once. In other words, inflation rates would have risen somewhat temporarily, but could easily have fallen back to their previous levels had the unions been prepared to accept this redistribution of real incomes toward oil-exporting countries rather than trying to impose it on domestic profit earners. In almost all countries of the world, however, rising price levels were the signal for unions to go all out and demand wage increases aimed at passing on the full burden of higher oil prices to employers.

This could not go well because, despite their negotiating weakness (in most countries of the Western world, much higher wage increases were still accepted than in Germany), the companies were able to raise prices so much when the economy was booming that part of the oil price costs nevertheless ended up back with consumers and employees. This was the perfect scenario for a wage-price-wage spiral, because now the unions had to try again to make even higher deals.

Not a shock, but a process

This is a pattern that applies to all truly inflationary developments: inflation is not caused by a specific event or a specific shock, but it is always the result of a process in which wages play the decisive role of driver. If there are no wage demands that are always based on rising inflation rates and can also be enforced, there will be no sustained or even persistently rising inflation. There are then still all kinds of price increases, but what we usually associate with the word “inflation” or “hyperinflation,” namely an accelerating inflation trend over several years, does not exist then.

There is clear empirical evidence of this. As the chart shows, the relationship between the inflation rate (whether you take the GDP deflator or consumer price inflation) and unit labor costs is extremely close over long periods. The two 20-year periods shown here also cover the period of the oil price explosions and show that after 1990, extremely low inflation rates were common throughout the industrialized world. This has not changed as a result of the Corona shock; on the contrary, deflationary tendencies have even increased. 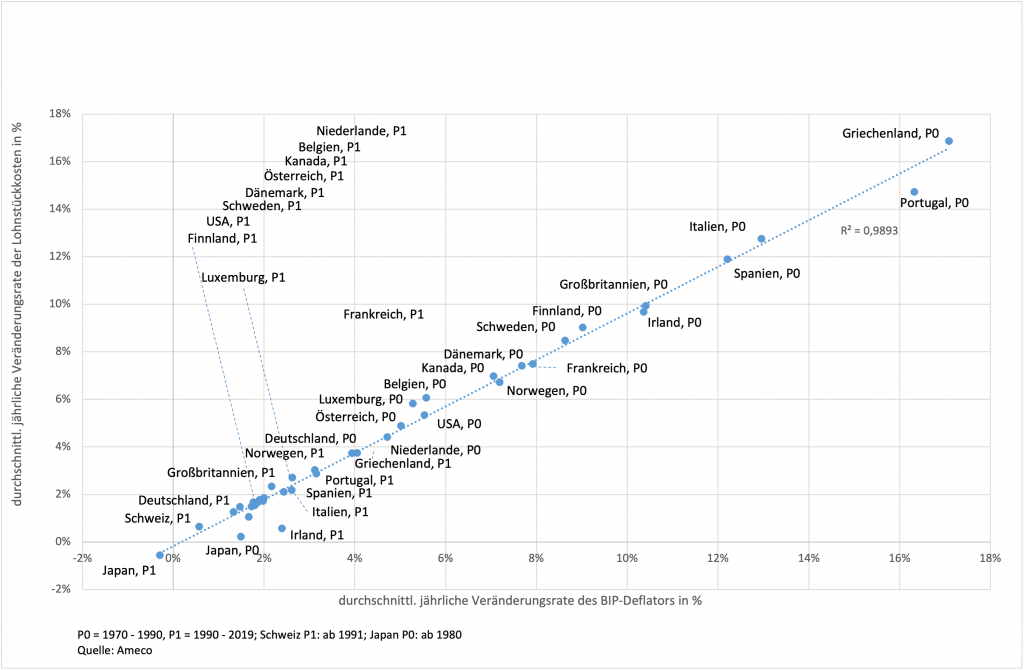 This can be easily seen in a table published a few days ago by the Federal Statistical Office on collectively agreed earnings in Germany. Collectively agreed earnings (including special bonus payments) in Germany rose by 2.0 percent in 2020, by a whopping 1.3 percent in the first quarter of 2021 and by 1.9 percent in the second quarter. Given this, anyone who talks about inflationary dangers is a fool or represents the interests of groups that hope to earn money from inflationary fears that they themselves stir up in the public.

With unemployment (including short-time work, which has been converted to full-time unemployment) at 8.7 percent (the latest figure published by the German Federal Labor Agency for June was 4.13 million in relation to all civilian workers), the unions have their backs to the wall and cannot even manage to incorporate the European Monetary Union’s target inflation rate of 2 percent into collective bargaining agreements, which means that real wage losses are imminent even if the inflation rate were to meet the target. This will not be the case this year because there are a number of temporarily effective special effects that will lead to more strongly rising prices.

The schizophrenia of central bank hawks

All of this has been said and shown hundreds of times. Yet it is mainly the conservative central bankers (often called the hawks) who cling to the fiction that inflation is a difficult-to-fathom, complex event that requires the daily attention of thousands of well-trained officials and highly specialized economic methodology to keep it under control. That is why the unambiguous evidence on wages and prices may only ever appear at most in passing in their commentaries. For example, in an interview with the Standard, the Austrian central bank president has to be explicitly told by the interviewer about the link between wages and prices before he half-heartedly addresses it himself.

The German central bank president, Jens Weidmann, argues particularly “intelligently” by simply connecting what should not be connected. He claims in the FAZ that transitory factors could lead to higher inflation expectations and thus accelerated wage growth. This is absurd if one does not add what scenario this idea is based on in terms of unemployment and economic activity.

If the unions cannot even push through the officially accepted and desired inflation rate of two percent in wage settlements (not to mention participation in medium-term macroeconomic productivity progress), it is completely out of the world to argue that higher temporary inflation could raise “inflation expectations” and thus higher wages could mysteriously be pushed through. In general, many central bankers and monetary theorists have created a vehicle in “inflation expectations” that can be used to make seemingly scientific arguments, but which is mostly just hot air.

Imagine if the European Central Bank were to concede that it is almost exclusively wage-driven processes with very low unemployment that must cause it concern with regard to an undesirably high inflation rate. Its importance in the political and public spheres would be dramatically reduced, and many would wonder why it takes such formidable apparatus to monitor a phenomenon that is easy to understand.

The task set for the Federal Reserve, however, is incomparably more demanding. It has to pursue the goals of employment and price stability on an equal footing. This is what makes the central bank’s work so demanding, because it means that the central bank not only has to keep an eye on the economy as a whole, but also has to weigh up in all its decisions whether the pursuit of one objective will not cause disproportionate damage to the other.

The ECB’s top management would certainly argue – and rightly so – that employment in the European Monetary Union is by no means lost sight of, even at the ECB. However, it is much easier to justify monetary policy in public if there is an easy retreat to the formal position that the central bank is not responsible for the damage that may be caused by a policy of (too) high interest rates. Moreover, and this point should not be underestimated, with an explicit employment target for the central bank, the independence of the central bank, which in Europe is glorified by the right and condemned by the left, is far less important. If the central bank can no longer retreat to the comfortable position that it is only responsible for a framework condition of economic activity and not for the entire economic outcome, its halo of glory is quickly lost. On the other hand, it is then also clear that this economic policy actor cannot, as many on the left would like, act on the leash of a parliament that itself has no competence in economic policy and monetary policy.