We saw in Part 2 that the rate of investment in Western industrialized countries is historically low. This, you have to imagine, is the result of forty years of neo-liberal revolution. As the result of theories that became dominant in the 1980s and which, in essence, divorce investment from such macroeconomic “details” as the development of demand. The rate of investment is now at its lowest point since the end of the Second World War.

The supply side, the German Council of Economic Experts told us in countless reports since the 1970s, need to take on the ‘leading role’ in economic development, as this is the only satisfactory and realistic way to create economic growth. At the political level this translated in the motto that ‘Entrepreneurship has to become worthwhile again.’ But this is nonsense! All the trouble originated because microeconomics and macroeconomic policy were not neatly (conceptually) separated. The failure to recognise this may have cost the German and the European economy a truly incredible amount of money in the meantime (in the order of several hundreds of billions of euro): growth that could have materialised, profits that could have been made, wages that could have grown, but never did. Bravo neoliberalism, if that is not entrepreneurship.

If we consider the crucial determinants of total demand growth and the evolution of real wages, it becomes immediately clear why an expansionary development, which would be sufficient to fully utilise our production capacity and encourage companies to invest in the productive economy, cannot take place (see Figure 1). 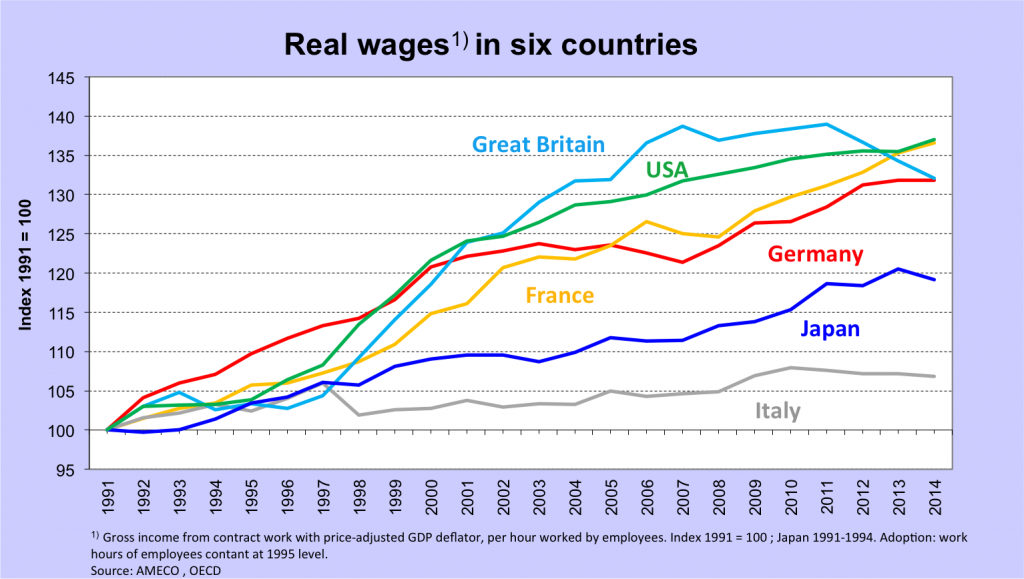 In recent years, real wage evolution came to a standstill in almost all developed countries. The US made hardly any gains since the end of the crisis of 2008/2009. In Britain real wages continue to decline. In Japan real wages stagnate. In Italy, real wages are slightly falling, after they had been stagnating for the last fifteen years. In Germany, real wages stagnated between 2001 and 2007. Now there is finally a slightly upward trend. The only exception is France: real hourly wages continued to rise if we disregard the short standstill during crisis of 2008-2009.

By using 1999 as a basis (see Figure 2) the pressure on wages, in particular in Germany, is clearly visible. The year 1991 as a basis gives a distorted view of Germany’s evolution. During the German reunification, real wages in both, the former East and the West of the country, strongly increased before the great wage moderation experiment started. To compare France, Italy and Germany also means to keep in mind that the nominal wage restraint in Germany partly reflects itself in falling prices. As a consequence the differences in real wages with France show up smaller than the difference in nominal wages and the evolution of unit labour costs. 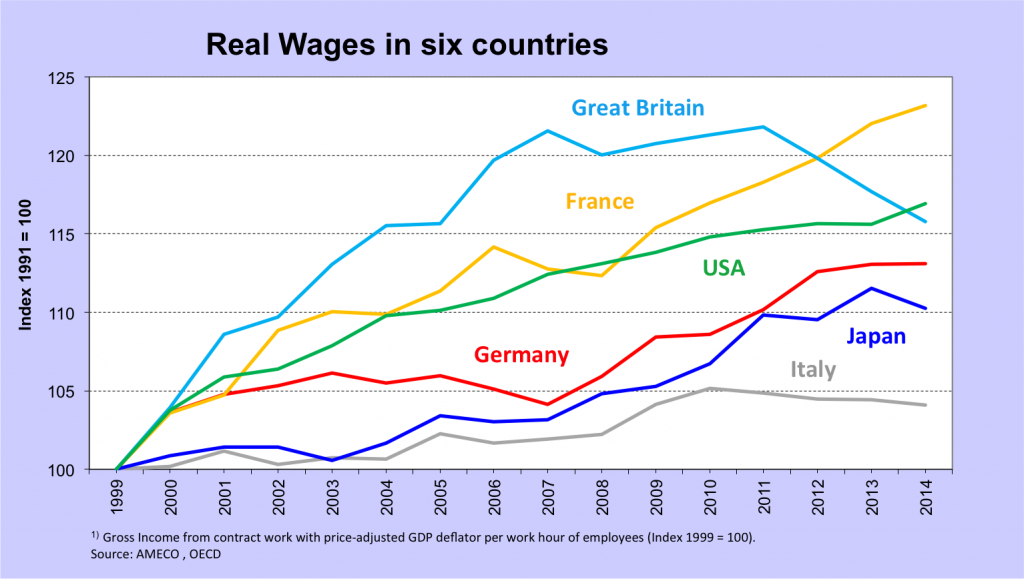 If we choose 1991 as the starting point (see Figure 3), in most countries during the 1990s, the real wage position of employees declined. Only the US recorded a slight increase on average, but keep in mind that most of the workers who benefited were at the top of the income distribution and that many of them where working within the ‘financial industry.’ For the rest, it all went downhill. In Germany, as mentioned above, the unification reflected itself in a slight increase before the decline started. 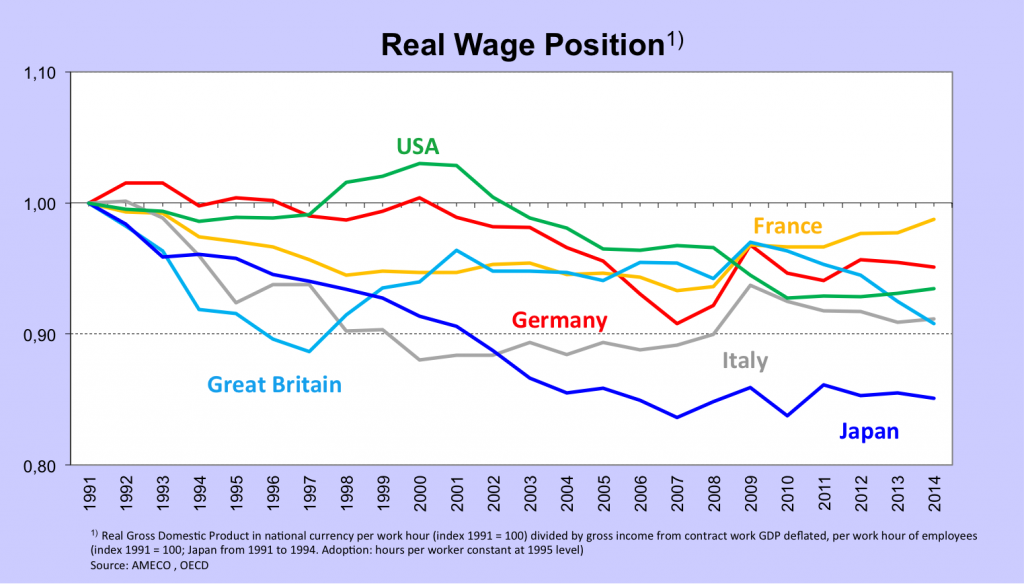 However, by using 1999 as the base point, the real political pressure on German wages is evident (see Figure 4). From 2000 onwards, which marks the beginning of the “reforms” of the first Schröder-government, the real wage share declined sharply in Germany, while the distributive position of employees remained constant in France as well as in Italy and in the UK or even slightly improved. As the graph shows, the wage share fell substantially in Germany, in the US and in Japan until 2007. It is only after the crisis of 2008-2009 that the wage rate stabilised at a lower level. In the UK, the wage rate continued to fall after 2009. 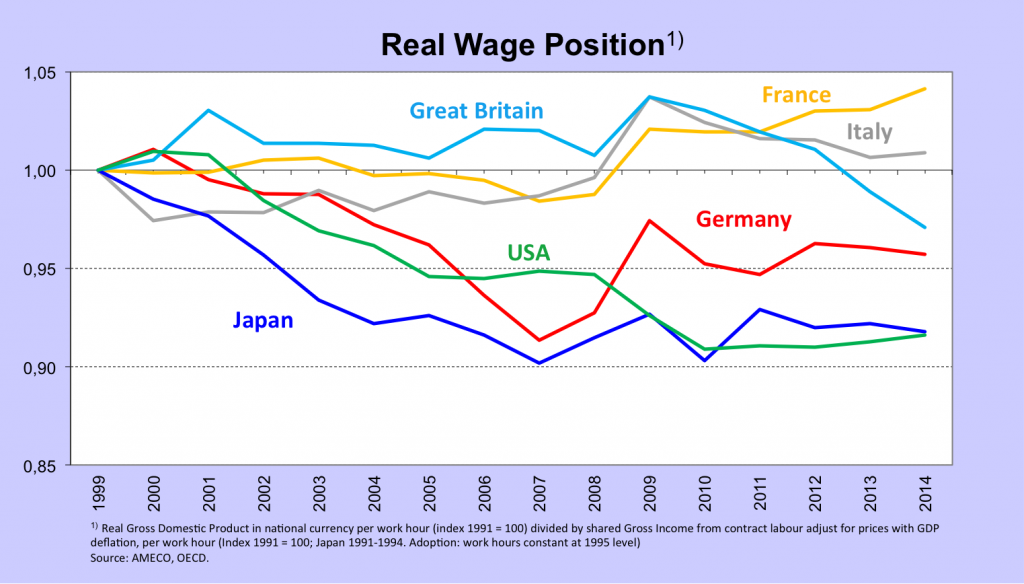 Here is the problem. If employees have consistently diminished expectations regarding the future, which means that they expect to be left behind the potential future productivity growth, then productivity gains do not induce a development of overall production that would be sufficient to fully utilize the productive capacities. Even the best technology, the most powerful robots and the greatest inventions will not induce higher productivity help if they are not embedded into an environment of dynamic demand growth. But this will not happen because the industrialised countries have taken another road. They committed themselves to the dogma of flexible labour markets and their politicians and economists no longer understand that stable income expectations of the mass of the working population are the key prerequisite for successful economic development (see also our contribution about this from early 2013 here – in German).

Overall, the message is simple: weak productivity growth results from lack of investment. The lack of investment results from the lack of demand and the lack of demand is the result of the formidable new paradigm of flexible labour markets. The talk about robots creating massive unemployment is a formidable smoke screen, implying that all the proposals being made to regulate the robotisation of our everyday lives are unnecessary. The calls from some of the left to introduce a machine tax are patently absurd (see for an example the position of the SPÖ, the Austrian social democrats, here, in German). This amounts, so to speak, to a tax on machines without machines. The only ‘machine tax’ that the world urgently needs are rising real wages. If care is being taken to ensure that real wages rise in line with productivity (as I explained in the first part) and if employees have the realistic expectation that they will fully participate in the overall progress of society through investment in machinery, the essential condition for successful rationalisation and automation has been met. Those who are destined to consume the products that result from a more efficient production process must have the means to buy them – and without the need to wait for falling prices.

demandinvestmentproductivityreal wageswage share
Previous Article Back Next Article
prev Back next