The prevalent and dystopian image of robots destroying jobs rests upon another popular image that has also gained widespread currency: the assumption that labour productivity has increased dramatically. This assumption makes logical sense since the purpose of automation is to increase productivity. Therefore, if robots are replacing human labour on an unprecedented scale, this implies that labour productivity currently increases at a much faster pace than in the past.

However, the empirical data show a different picture altogether. Figure 1 depicts the development of labour productivity per hour (indexed to 1991) in the five biggest industrial countries. The figure clearly proves that productivity growth has slowed down. In fact, it slowed down quite dramatically. The decrease in productivity has been most apparent since the end of the great crisis in 2008-2009. Productivity almost stagnated in each of the five countries – ironically these are the countries you would expect to be the forerunners in technological innovation and progress. 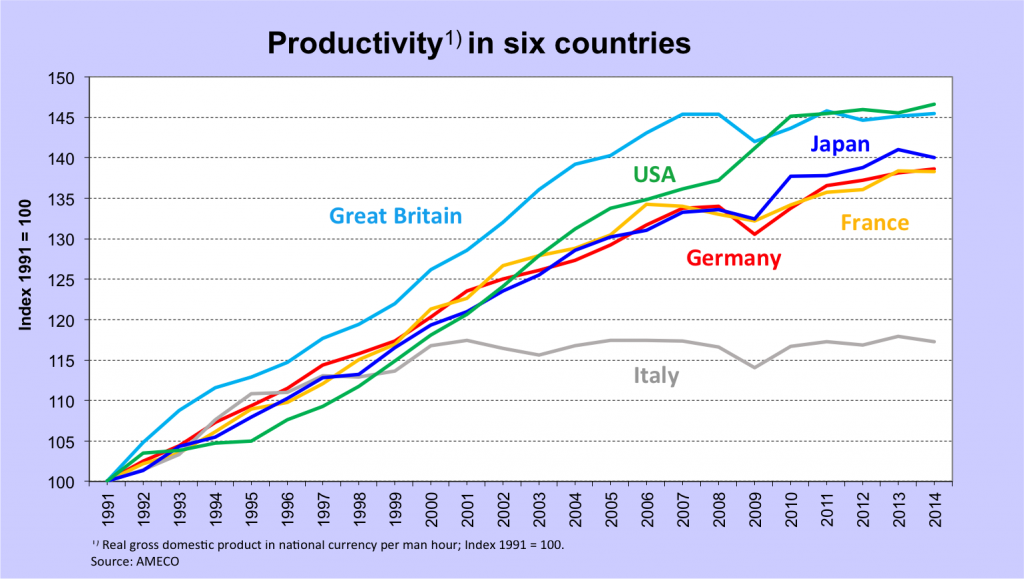 Even in the US, which recovered from the financial crisis better than most other OECD countries, productivity growth is remarkably slow. For one reason, the US is a strange case because the evolution of its productivity shows an upward jump in 2008 and 2009, at the time, where in the other countries, productivity decreased. This is difficult to explain since, during a recession, productivity normally decreases because companies are not quick enough in adjusting their work force to the rapidly falling production. The figure also shows the unique development in Italy. Shortly after the birth of the European Monetary Union, a dramatic turnaround in the development of the Italian economy took place and productivity stalled.

In Figure 2, we display the annual growth rates of the data from Figure 1. This gives an even better attenuation. From about two per cent growth in the 1990s, productivity declined to below 1% everywhere after the start of the new century. 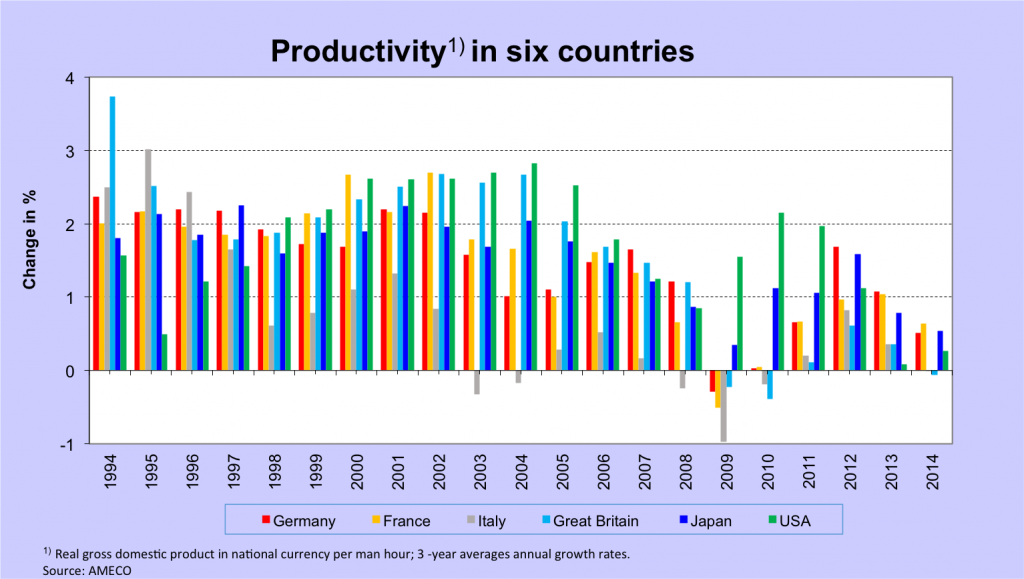 These developments can hardly be reconciled with a new technological revolution. In fact, many seem to overestimate the impact of the digital revolution on labour productivity. Sometimes the exaggerations are extreme. There is no doubt that a new technological revolution is taking place. There is also no doubt that impact of technological change on individual workers will be as strenuous as the impact of previous technological revolutions. Nevertheless, one must consider the specific conditions and characteristics of today’s economies. What is lacking today is the implementation of new technological possibilities at a comparable pace to earlier technological investment cycles. This mismatch, therefore, causes the image of robots as massive job destroyers to be inaccurate. Robots and automation did not destroy jobs on a significant scale because, as I explained in the first part of this article, current macroeconomic conditions are working against it: low productivity results from low investment rates which depend on low aggregate demand which is due to several factors – austerity, wage moderation and restrictive fiscal policies. Why blame technology if the problem is misguided and counterproductive macroeconomic policies?

The ultimate explanation for the state of affairs is quite clear: it is weak investment. Figure 3 shows the development of all investments (machinery, equipment and construction) over time. The figure shows that investment was already weak since the early 1990s. The United States is an exception mainly because housing investment expanded in the 2000s (leading to the so-called housing bubble). Germany and Japan largely decoupled from positive development. France is doing better, but, as all other countries, austerity deflates its economy and there seems to be no way out. Since the great crisis, there has been a revival of investment activity in the US (and to some extent in the UK). The evolution in Italy since mid-2000 cannot be called anything but extraordinary. 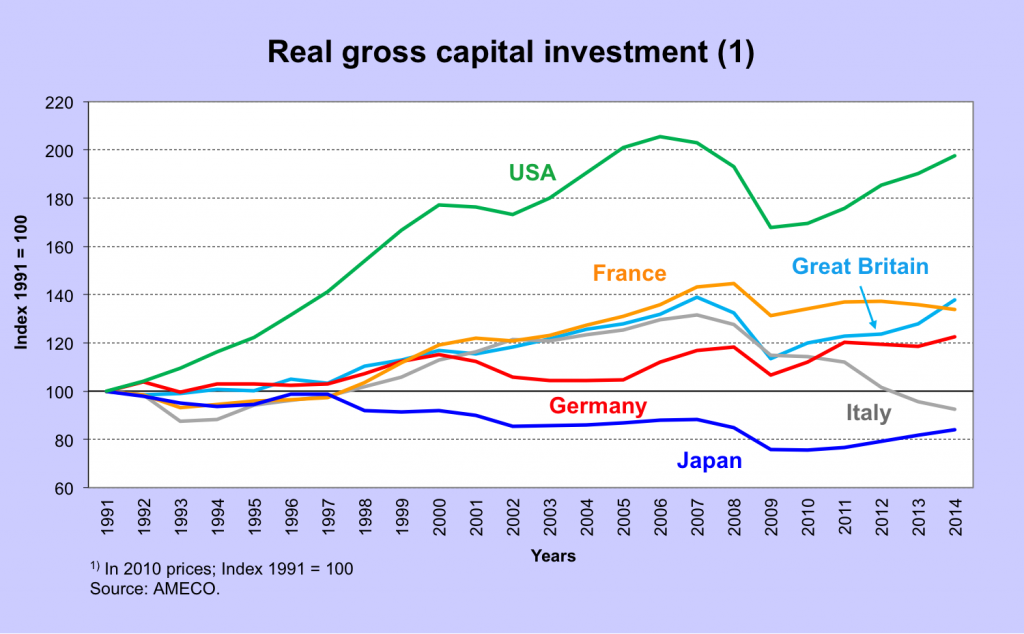 Figure 4 shows the evolution of investment ratios. The ratio of investment to GDP decreased dramatically in Japan. The US continues to experience low investment ratios since the 1990s. In the UK, the rate of investment has been historically weak. Even Germany faces a slow but steady decline during the last twenty years. In Italy, the situation is much worse. It is not surprising that more and more Italian economists blame the Italian membership in the EMU for the extreme decline of Italian investment ratios. 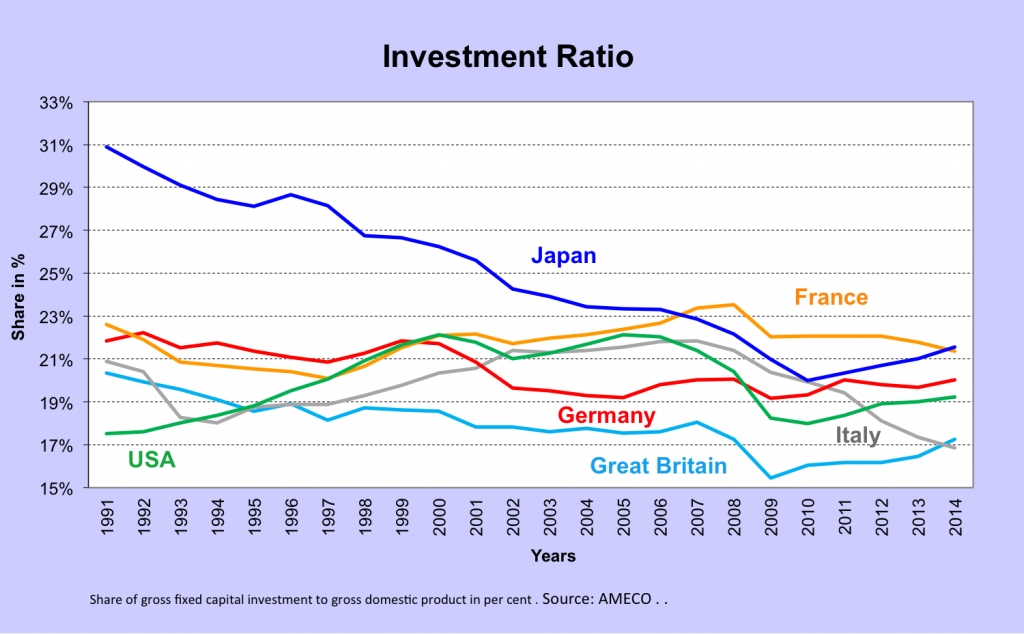 But why is Germany also doing poorly? Germany has given massive so-called ‘investment promotion’ that facilitated tax reductions for companies (I have repeatedly commented on this, see, for example, here). Tax rates for companies are being slashed and wages are being lowered; however, companies have refrained from investing and creating new employment. Although this an absolutely essential factor, it is hardly ever mentioned. And when people write about it, as did Marcel Fratzscher, the president of the German Institute for Economic Research Institut (DIW), they sweep this information under the carpet (see here (German) and here (German)). The DIW stubbornly refuses to recognise the basic fact that domestic demand has been extremely weak for many years by now. Klaus Wohlrabe from the Institute for Economic Research (ifo) at the University of Munich told the Frankfurter Allgemeine Zeitung: ‘The basic conditions have been very good for many years.’ The Ifo researcher cites low oil prices, low interest rates and favourable financing conditions for companies, concluding that: ‘Every year you think, here we go, but then not really.’ For the economists at the ifo institute, the reason why Germany is not growing is a ‘mystery’.

Yes, dear colleagues and economists, it is a real mystery. Impose thought-controls – and scientific research and rational explanation suffer. Klaus Wohlrabe mentions low taxes for businesses and low wages in his list of ‘good conditions.’ The idea that low wages could weaken investment growth must strike a mainstream economist as completely absurd. It is nonetheless the reason why growth in Germany is so weak.

In Part 3, I will explain why the ratios of investment are so low and why investment has failed to recover since the Great Recession despite very low interest rates.

demandGermanyinvestmentItalyproductivityUnited Stateswages
Previous Article Back Next Article
prev Back next