“The policy of reducing Germany to servitude for a generation, of degrading the lives of millions of human beings, and of depriving a whole nation of happiness should be abhorrent and detestable, – abhorrent and detestable, even if it were possible, even if it enriched ourselves, even if it did not sow the decay of the whole civilized life of Europe. Some preach it in the name of Justice. In the great events of man’s history, in the unwinding of the complex fates of nations Justice is not so simple. And if it were, nations are not authorised, by religion or by natural morals, to visit upon the children of their enemies the misdoings of parents or rulers.” J. M. Keynes, The Economic Consequences of the Peace, 1919

The German Minister of Finance, Christian Lindner, needs advice. In fact, he desperately needs good advice. Wise advice would great. He probably thought so himself and, indeed, he is seeking advice. The former chairman of the so-called economic wise men, the German Council of Economic Experts (SVR), Lars Feld, is to become his chief advisor.

This is piquant because it was precisely this chairman who, under pressure from the SPD in the coalition with the CDU, was not renewed as council and had to leave. That he is now, in a coalition led by the SPD, given the presumably incomparably more important post of chief adviser to the federal finance minister, again shows that in this coalition all three parties are muddling along without even attempting a common line.

But much worse is that one can be absolutely sure that this former economist will confirm the economic layman Christian Lindner in all his false prejudices, because this is exactly what he demonstrated in practically every expert opinion during his time at the SVR. The expert opinions with and under Feld were characterised by the fact that there were practically no original results of the councils’ work, but the simple reproduction of the mainstream doctrine on all conceivable problems. So this council never got beyond the state of affairs, which could be learned by studying the “right” literature.

Lindner, like every good liberal, firmly believes that there is such a thing as “Ordnungspolitik” (politics dealing with the order of the economy instead of the development of the economy), which could be a substitute for intelligent politics. Him coming from Freiburg is no accident. At the University of Freiburg, many still mourn Friedrich August von Hayek, who – having failed miserably in the intellectual debate with Keynesianism – set out to give the free-market order a radical ideological superstructure. Unfortunately, everything that is important and worth understanding about the order was lost by building this superstructure.

The German Life Lie as the Basis for European Politics?

Immediately after the appointment of Lars Feld, Christian Lindner reveals in an interview with the Handelsblatt how badly he needs the advice he will never get from Lars Feld. On the question of European debt rules, he says the following:

“It is important to me that we achieve a binding path to reduce debt ratios in Europe. This was not achieved after the financial crisis a decade ago. In the same macroeconomic environment, some of the members of the monetary union have built up fiscal buffers and reduced debt levels, while others have higher debt ratios.”

Germany and the Netherlands in particular took advantage of EMU to secure global market shares at the expense of the other EMU members, to massively promote their own export industries at the expense of their own workers and thus to achieve high current account surpluses. Only these countries could afford fiscal consolidation because they shifted the debt of one or more sectors, which is always necessary for economic development, abroad. They clearly violated European rules by doing so – but this is nonchalantly brushed aside as a venial sin in Germany.

To now pretend that it was only a lack of political will or a lack of political assertiveness abroad that prevented everyone from being as virtuous as the virtuous countries is pure cynicism. If, in a community like EMU, the strongest partner does not understand that not everyone can behave as he does in order to be successful, but this very partner claims to promulgate universally valid rules, red alert has been sounded.

Lindner’s first sentence, where he calls for a “binding path to reduce debt ratios in Europe”, no doubt set alarm bells ringing in France and Italy. Macron and Draghi have not in vain – and quite rightly – called for flexibility in this matter in the FT. To implement a binding plan to reduce public debt in Europe as a whole is just as impossible and just as absurd as the plan of the victorious powers after the First World War to make Germany pay high reparations for decades. At the time, however, only one person in the entire world understood this, namely the English economist, who is still not understood by the official advisers in Germany.

Arguments without logic and without empiricism

One only has to take a look at the financial balances in EMU to realise how absurd Lindner’s theorem is (Figure). With saving companies and saving private households (the blue and the red lines above zero) over the past 20 years, the only logical way to reduce government debt (from which level is completely irrelevant) in relation to GDP would be to expand the European current account surpluses. The rest of the world, and especially the USA, will not accept this. When the German finance minister makes demands for a reduction in government debt, he and his advisers must say how this is to be done. 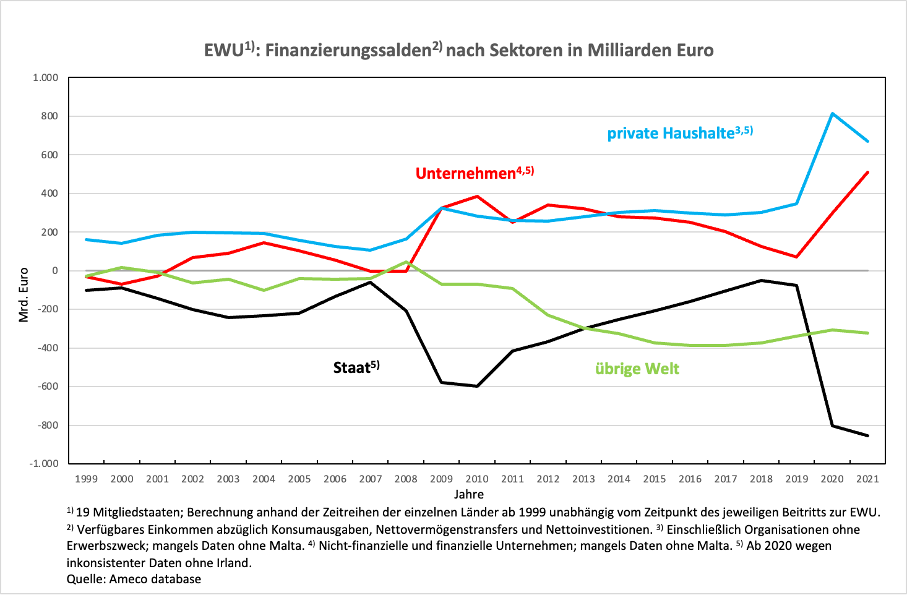 Lars Feld has not indicated, either in his time at the SVR or before or since, that he knows, let alone understands, this macroeconomic context. Therefore, it will be inevitable that the remaining Europeans will now finally discuss loudly and seriously in public how to cope with a country that manages to sweep the simplest logical and empirical correlations completely under the carpet and thus also deny them to its own people.

Certainly, Lindner will reap much encouragement in Germany for his “tough” stance towards the “less solid” countries. But it is the encouragement of those who consider a punishment appropriate even if the convicted person can never deliver it. Such people exist. But when politicians throw all wisdom to the wind and pander to dull prejudices, then any folly is possible. Keynes’ admonition of a hundred years ago has hardly been understood even in Germany to this day, although – in view of what happened afterwards – everyone should at least sense how appropriate it was.