Ludger Schuknecht, the head of the Department for “Fiscal and Economic Policy Questions” at the German Federal Department of Finance, responded in the Sueddeutsche Zeitung (SZ) to the open letter that Heiner Flassbeck, Dani Rodrik, Thomas Piketty, Jeffrey Sachs and Simon Wren-Lewis wrote to Angela Merkel on July 7. According to the SZ, Schuknecht is ‘chief economist at the Ministry of Finance.’ This position does not exist formally given that neither the minister nor any of the deputies of the minister are economists – they are all lawyers.. Perhaps Schuknecht is doing the job nevertheless.

The reaction, however, does not indicate that the ‘chief economist’ is ready for an open debate.

The message of the five economists is very clear and straightforward. In their message to Merkel, they wrote: “The Greeks have complied with much of Angela Merkel’s call for austerity – they cut salaries, cut government spending, slashed pensions, privatized, deregulated and raised taxes. But in recent years, the series of so-called adjustment programs inflicted on Greece and other crisis countries has served only to make a Great Depression; the likes of which have been unseen in Europe since 1929-1933. The medicine prescribed by the German Finance Ministry and Brussels has bled the patient, it has not cured the disease. It even hurts those who were not even born at the beginning of the crisis.”

In other words, the measures that have been imposed upon Greece by the Troika and the political leadership of the EMU have been a complete failure. Its proponents assumed that it would be possible to cure the patient with cuts and deregulation, but the patient only became more ill. That outcome hints to the fact that the diagnosis of the disease was wrong and the theory behind the cuts is wrong. Therefore, the last thing that we should do is administer more of the same medicine; unfortunately, this exactly what is happening at present.

If Wolfgang Schäuble’s ‘chief economist’ wanted to contradict our views and defend his theses, he had to start by explaining why the results of austerity have been so dismal, why the Troika has been so fundamentally wrong in both its analysis and predictions and why, this time, the same policies would lead to positive outcomes. His answer contains nothing of the sort. The only substantive part of his text is a reference to Olivier Blanchard (who is, of course, not yet an independent researcher but advisor at the IMF, which makes up one part of the Troika). Blanchard asserts that “Fiscal austerity was not a choice, it was a necessity. Efficient governments with primary surplus budgets are a prerequisite for growth. The economy can only function when there is a positive regulatory framework in place that offers services and chances to citizens, such as, for example, decent education.”

But Blanchard’s statement is misleading and it is easy to see why. My colleague Richard Koo has shown many times that governments do not have many choices left in a situation in which households are trying to save a substantive part of their income, companies are not investing (or, in any case, not spending) and foreign trade does not create positive contributions to income growth. What can a government do in such a situation? If the government is not willing to allow a growing deficit then the economic outlook will deteriorate and the economy will spiral downwards. There will be less aggregate demand, less spending, less investments and less government revenue. If the government is not stepping in by implementing anti-cyclical measures then the fall in income and production will continue indefinitely.

Anyone who is not dealing with these fundamental dynamics of a market economy is not saying much at all. Furthermore, the kind of politics that are called “Ordnungspolitik”(politics influencing the legal framework for the market) just do not deal with situations like that. The German government has demonstrated an awareness of this phenomenon in the past. During the Great Recession of 2008/2009, the Federal Government indeed implemented Keynesian measures at very short notice for some time. However, the issue was later brought up by German industry and the government worried about German voters.

Greece is a member of a monetary union that has been so poorly designed that it cannot work. As long as the macroeconomic architecture of the euro zone remains unchanged, there will always be imbalances creating dysfunction within the eurozone. What can Greece do? It does not have access to a central bank as a lender of last resort. Without a sovereign central bank, the situation is unmanageable. In normal circumstances, the government has the ability to access capital markets for its anti-cyclical measures, either directly, through private banks or it can use the central bank. This is true even if extremely high levels of public debt exist, as the case of Japan shows. The only rational solution is that the surplus countries, those that have easy and cheap access to capital markets, guarantee emergency loans to the crisis countries. Then everyone can grow again. This is the essence of the whole debate.

However, for this to happen, it is essential for politicians in the surplus countries – as well as the ‘chief economist’ of the department of finance of the main surplus country – to understand these relationships. Whether it will be necessary to implement ‘structural reforms’ in addition to the financial assistance is another question, and one that has to be answered very cautiously on a case by case basis. To allow such an economy to enter a downward spiral is no solution at all. It will further deteriorate public and private finances and will ask for even more assistance from the surplus countries.

Whether a country can achieve a primary surplus of 3.5 percent of GDP in its national budget depends on several factors, including foreign trade. Ludger Schuknecht argues that Belgium, Italy and the Netherlands manage to accomplish such primary surplus, so if this is possible there, why not anywhere else? When countries build up current account surpluses, achieving primary surpluses is not problematic. If private companies heavily invest or households reduce their savings rate, there is not a problem either. These are the characteristics of healthy economies. However, none of these factors – current account surpluses, savings rate reduction and vigorous private investment – are present in Europe nowadays. It is absurd to demand a primary surplus and a growing one at that (1.5 % this year up to 3.5 % in 2018) from the Greek economy when none of these determinants are operating. Moreover, contrary to what the German government assumes, none of this depends on the ‘willingness’ of the Greek government or on its level of political efficacy. The Greek government, or any other for that matter, can make as many cuts as it wants, or is forced to make. Given the present economic conditions, however, these cuts will not lead to fiscal consolidation.

Contrary to what Ludger Schuknecht claims, it is absolutely not the case that most of the crisis countries are on the right track. Only Ireland, for highly specific and unique reasons recorded something that might, with good will, be called a recovery. In Spain, Portugal, Cyprus and Greece there is no turn around whatsoever. In the best case, there has been miniscule growth in one or two quarters according to the official GDP figures, – but this is not a recovery. All these countries are characterised by stagnation at an extremely low level. In Greece, the situation is much worse because Greece never witnessed growth of anything whatsoever, with the exception of some dubious ‘sentiment indicators’ that are not correlated to economic activity at all. Given this, the new bail-out program will suck Greece further down a black hole of stagnation, misery and upheaval.

What is more – and this is the best proof of the failure of austerity as it has been prescribed by Berlin – the economy of the whole of Europe is doing badly. Since 2011, there has been virtually no progress anywhere and there has only been regression. The United States followed a more aggressive monetary policy and implemented somewhat pragmatic fiscal policies. Economic activity in the U.S. now exceeds the level of 2008 and more people are at work again. But, under German leadership, Europe has not shown any success. 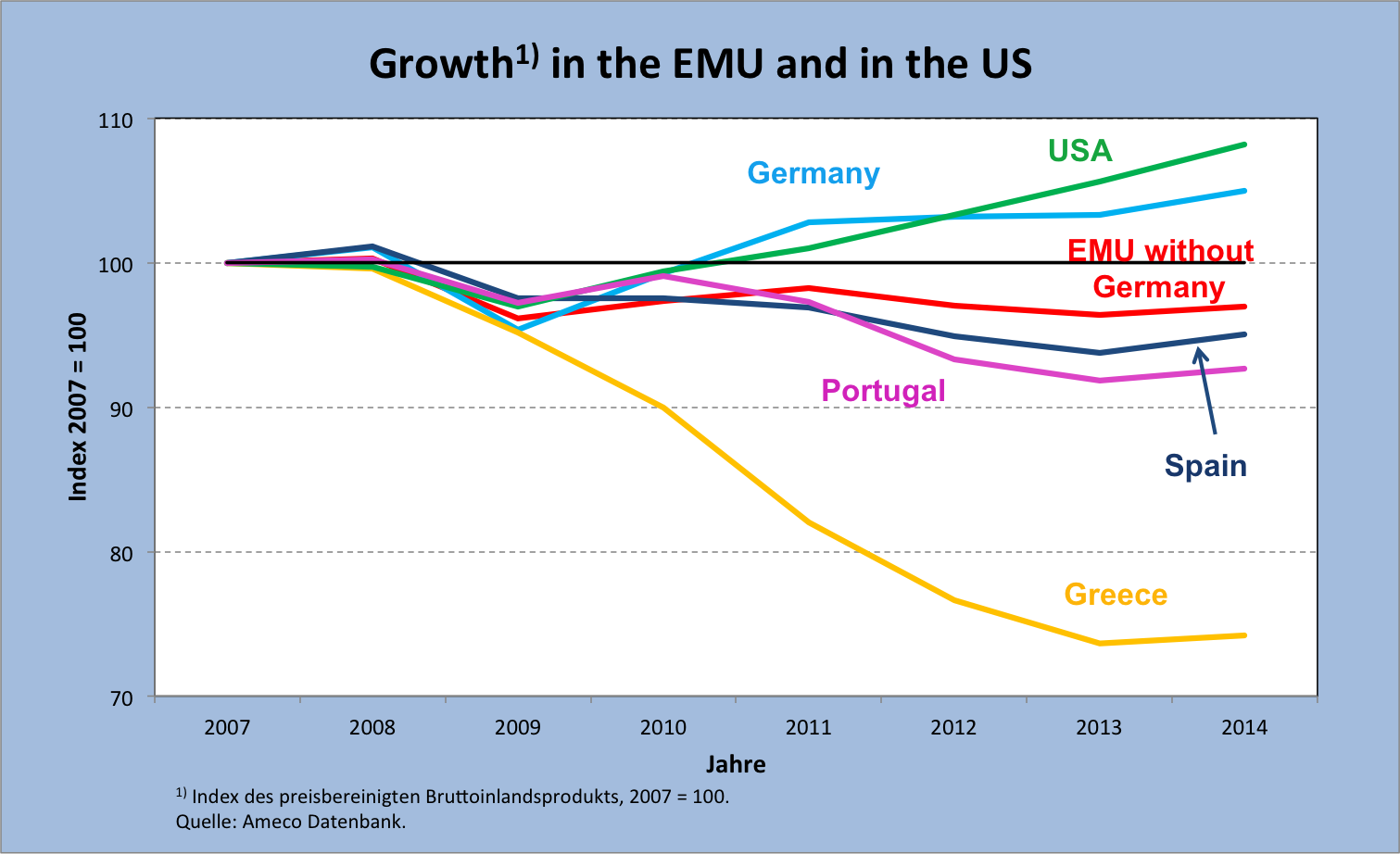 Only Germany continues to benefit from the mercantilist constellation it has created within EMU: it realises huge export surpluses on the basis of an undervalued euro with the rest of the world, while the other eurozone member states profit very little in comparison. Yes, the euro exchange rate is favourable for exports, but for the moment no one is able to compete with the Germans. Germany is, so to speak, like the tortoise in the parable of the race between the hare and the tortoise. Germany conquers foreign markets and when other Europeans arrive, it yells: I am cheaper!

Should Germany one day lose this safeguarding advantage, either because the euro zone dissolves or because countries outside of Europe start actively defending their currencies (that means the currencies depreciate relative to the euro), the main determinant of Germany’s economic power, the export surplus, would collapse and with it German growth. The German trade surplus, which exceeds 200 billion euros annually, really needs to be compared to the 86 billion euros in aid for Greece. The aid package, of which only 27% has to be borne by Germany, will have to be negotiated in the next few weeks. In the meantime, German industry should once again meet with the German government to explain what is at stake before the German Minister of Finance uses the next round of negotiations to push Greece out of the euro zone.